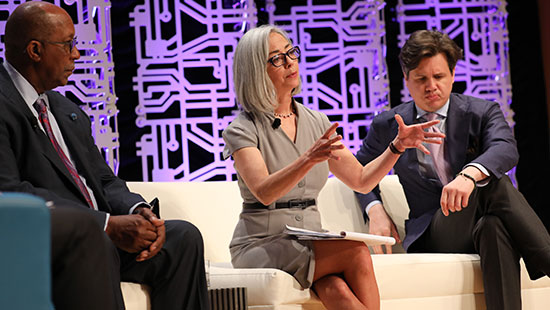 Current news of tariffs and trade wars is the latest evidence that the ideology of free trade and globalization is under attack. This battle isn’t being fought in classrooms or among academics (most economists view free trade as broadly beneficial for the global economy), but on the front lines of social media. “Free trade supporters have lost the debate completely in… this new space,” stated Andrew Wilson during our NOW 2018 panel on trade policy.

According to Wilson, free trade proponents have a communication problem: Despite convincing arguments, they have steadily lost ground to inflammatory anti-trade rhetoric that connects emotionally on issues like jobs or security. Social media has enabled extreme views on trade to become a part of mainstream thinking.

Carla Hills, a former U.S. trade representative and chief negotiator on NAFTA, noted that many Americans don’t understand the extent to which future U.S. growth depends on international trade. “With five percent of the world’s population producing 15 percent of the world’s output, we can’t just look inward. We need the markets overseas.” The data backs her up: A recent Peterson Institute report found that freer trade helped annual U.S. GDP grow by $2.1 trillion between 1950 and 2016.

Ron Kirk had a different experience with trade and NAFTA, as mayor of Dallas in the 1990s. NAFTA helped open up new markets for local businesses, but he saw the instinctive fear that in some cases transcended logic, among many who feared their jobs would be outsourced due to NAFTA. He recalled a Dallas factory worker who had complained to him that NAFTA had led to his factory being shuttered—in reality, the worker’s job had been lost years before NAFTA was signed.

Over time, many more U.S. manufacturing jobs have been lost to technological advancements and automation than to trade. Neither the public nor the private sector adequately trained or invested in those displaced workers. Thea Lee noted that free trade policies have generally failed to proactively protect U.S. workers, and ultimately these failures have contributed to the recent populist backlash. In Lee’s view, future trade policies are set up for failure if they do not adequately address workers’ rights and important issues such as environmental protection.

While disagreeing on several points, the panelists found consensus on several key points. They agreed that the current administration’s trade moves have been poorly communicated, creating a great deal of uncertainty for U.S. businesses and major U.S. trade partners. This uncertainty could drag the economy down if it begins to affect business decisions and overall sentiment. Also, they all felt that the World Trade Organization, while not perfect, is still our best option for resolving trade disputes because it is the only mechanism we have for enforcing global trade discipline. As Kirk described the organization, it is “the best house on a bad block.”

Finally, the panel all emphasized that education and investment in U.S. workers are critical for U.S. competitiveness in the future. Many displaced workers don’t have the skills for better jobs that are now abundant in America. Hills discussed the millions of high-paying, technology-oriented jobs that are currently unfilled in the U.S. due to a lack of skilled workers. Kirk also called for better education and skill training so we can compete with China. Lee argued that advocating for workers through fair policies and education is a win-win: It would address trade issues and also serve domestic political agendas. Finally, Wilson noted that proper education and skill training would also address the communication and messaging problem for free trade supporters by replacing fear with confidence among many workers. If the U.S. can educate its working class to excel in a broader range of emerging industries, maybe it can replace fear with confidence as the dominant narrative thread when it comes to free trade.