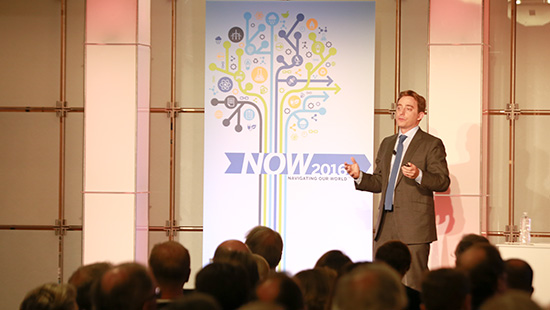 Friction will probably persist in Sino-U.S. relations as China grows increasingly assertive and discards its long-standing strategy to “hide strength and bide time,” according to Evan Osnos, a China specialist and correspondent with The New Yorker. “We are in an era of strategic anxiety with China,” Osnos said in a NOW presentation. “It’s not at all clear what the intentions of each side is with respect to the other,” and “there will almost certainly be much more friction to come in the next few years.”

Beijing has taken a more aggressive stand beyond its borders than any time in decades, rapidly enlarging contested reefs and islands in the South China Sea for military purposes, Osnos said. Still, China does not aim to replace the U.S. overnight as the dominant global power because it recognizes the high cost of leading the world against such threats as Ebola and ISIS. Instead, China wants to rise to the status as one of several great powers in a multipolar world, Osnos said.

Washington needs to pursue a nuanced policy as it sustains beneficial contacts in trade and other fields while resisting disruptive moves by Beijing, including its buildup in the South China Sea, Osnos said. “We sometimes use a blunt instrument when we need a scalpel.”

Based in Beijing from 2005 until 2013, Osnos won the National Book Award in 2014 for Age of Ambition: Chasing Fortune, Truth and Faith in the New China.

The U.S. and China should seek to avoid the “Thucydides Trap,” in which an incumbent power and newly emerging rival fail to resolve differences and eventually clash, Osnos said. Thucydides, a fifth century B.C. historian, chronicled hostilities between Sparta and Athens in History of the Peloponnesian War. Outright conflict has flared in 11 of the 15 cases in history in which a rising power has challenged an incumbent, Osnos said.

Growing bilateral competition coincides with an intertwining of interests in such areas as finance, trade, nonproliferation and anti-terrorism, prompting contradictions in the U.S. perception of China, according to Osnos. Americans simultaneously view China’s economy as both strong and vulnerable, while in geopolitics, they see Beijing as both a partner and an adversary, he said.

As President Xi Jinping more aggressively pursues China’s global interests, he has amassed more power in domestic politics than any other Chinese leader since Mao Zedong, Osnos said. Xi aims to avert disorder at all costs, having grievously suffered with his family at the hands of the Red Guards during the Cultural Revolution (1966-1976).

China’s president, according to Osnos, aims to overcome three challenges to stability:

Economic stagnation. China’s economy has slowed after decades of rapid growth, and public dissatisfaction may swell as expectations for greater prosperity go unmet. Xi recognizes that transitioning from an export- and investment-oriented economic policy toward reliance on services and consumption would likely spur growth, Osnos said.

Corruption. Xi has launched the harshest crackdown against graft in decades, mindful that crooked officials undermine the Communist Party’s credibility and the effectiveness of the government, according to Osnos.

Foreign influence. Xi sees threats to political order from new technology and Western concepts, such as individualism and democracy, Osnos said. He believes a firm hand is the best way to avert such tumult as the collapse of the Soviet bloc more than two decades ago, unrest in Tibet in 2008 and Xinjiang Province in 2009, and the Arab Spring uprisings in 2011.

Xi aims to pose a “counterargument to the allure of Western ideas” by promoting the notion of a “Chinese Dream,” in which an increasingly prosperous China becomes a dominant civilization, according to Osnos.