NOW 2016 | The Reality of Climate Change 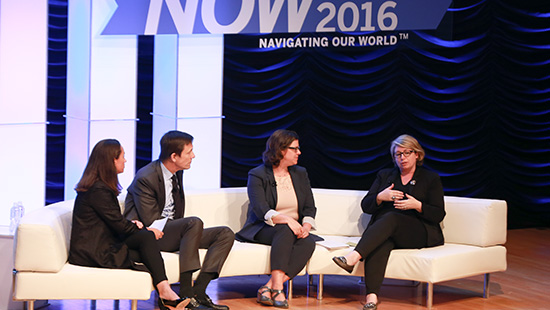 A change in climate caused by a buildup in greenhouse gases may bring a host of afflictions, including a reduction in crop yields and mass migration of people in several regions, according to the speakers in the NOW session titled, “The Reality of Climate Change: Impacts on Health, Food, Water and National Security.” Disruptive events triggered by climate change in countries with weak governments, fragile economies and crude infrastructure could lead to political instability and a reduction in worldwide trade, according to Sharon Burke, a senior advisor at New America. Global economic growth would slow, harming industrialized as well as developing countries.

China holds an especially central role in global warming and efforts at regulating greenhouse gases, both at the domestic and international level, according to Kate Gordon, the vice chair of climate and sustainable urbanization at the Paulson Institute. The country’s regulatory weaknesses and counterproductive business incentives are slowing efforts outlined by China’s government to limit climate change, she said.

Beijing is currently focused on shifting the world’s No. 2 economy to be based on services and consumption rather than on industrial manufacturing and government investment. As China’s steel production declines, such industrial output may shift to emerging economies with weaker environmental regulation, Gordon said. Indeed, China’s steel output increased during the 1980s amid a decline in U.S. coal and steel production stemming in part from tougher regulation. In other words, in the absence of effective global measures to limit climate change, China’s reductions in greenhouse gases could lead to increases elsewhere. 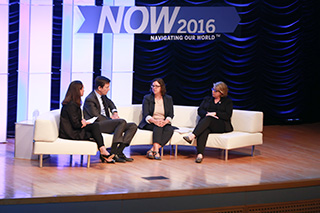 That said, there are many reasons to be guardedly optimistic that the world may begin to curb climate change, according to Mark Tercek, president and CEO of the Nature Conservancy. This progress was evident in diplomacy leading up to an agreement by 195 countries in December to take steps limiting climate changes. Under the pact, signed in Paris, the signatories pledged to reduce reliance on fossil fuels in favor of more sustainable technologies such as wind and solar power.

The campaign against climate change should move forward simultaneously across many fronts. Stepped-up research into energy-efficient batteries could help realize the goal of sustainable transportation, Gordon said.

Tercek, while stressing the importance of protecting biodiversity and promoting sustainability in urban areas, said he sees reasons to be “cautiously encouraged about the likelihood that humanity is going to finally get its act together” and begin to slow the growth in greenhouse gas emissions.