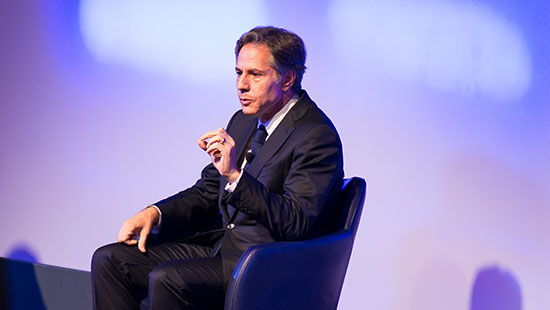 Under Secretary of State Clinton, the U.S. began to pivot its diplomatic and military focus toward Asia. Asia encompasses 40% of global gross domestic product, four of the top 10 trading partners of the U.S. and almost two-thirds of the world’s middle class. (Blinken described the Trump administration’s decision to abandon the Trans-Pacific Partnership in January 2017 as “pulling the gun out of the holster, finding your foot, aiming very carefully and pulling the trigger.” The idea that the U.S. would limit its economic access to Asia is “criminal,” in his words.) He believes that going forward, the true wealth of a nation should be measured largely by its ability to liberate its human resources. Focusing on China, he applauded the efforts to loosen the country’s economic reins in recent years but noted that there has not yet been an accompanying easing of the social and political restrictions and pressures. At some point, Blinken believes, the rapidly growing middle class will ask for this. 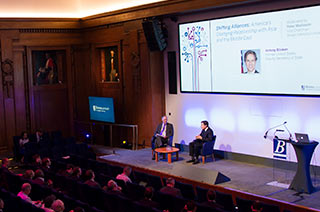 Turning to India, he described the world’s largest democracy as being in a very strong economic position. With favourable demographics, 40% of its gross domestic product from foreign trade and status as the world’s leading defense importer in recent years, India is poised to drive global growth over the coming decade. Where it falls short is human development and ease of doing business—areas that will need to improve if India hopes to attract continued investment from the developed world.

The U.S. and its allies are facing a number of threats around the world—Blinken listed North Korea, Iran and ISIS, among others. Blinken was deeply concerned about North Korea and its leader, Kim Jong-un, believing the situation there has reached “an acute phase.” In recent years, North Korea has sped up its progress on nuclear arms development and, in Blinken’s opinion, is “a few years away” from having the capability to reach the continental U.S. with a nuclear intercontinental ballistic missile. He noted that “we looked very hard at military options, and the truth of the matter is that there is simply not a good one.” He believes that the only hope is to try to get Kim Jong-un to the negotiating table by convincing China, which represents 90% of North Korean trade, to implement sustained economic sanctions. 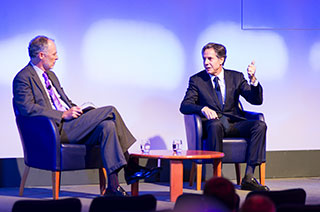 With recent terrorist events in the U.K., Blinken’s comments about curbing the influence of ISIS were especially relevant. The good news, he said, is that the U.S. and its allies will shortly take away ISIS’ self-declared caliphate in Mosul, Iraq, and that should render impotent one of the organisation’s primary narratives—that it is building a physical state. The bad news: Given how difficult it has become to travel to Iraq and Syria, ISIS is now telling followers around the world to “stay at home, attack at home.” To combat this more dispersed threat, intelligence and information sharing among countries is now even more essential. The U.S. has worked very hard to convince countries around the world to connect to Interpol so that information can quickly be used to monitor and detain individuals that have become radicalised.