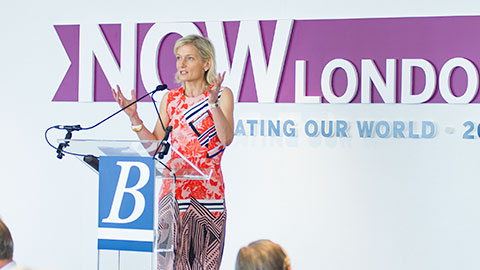 Those looking for a security blanket may have been disappointed. Minton Beddoes delivered a thoughtful and perceptive critique of the global environment. The main body of her talk began with a thought experiment: If we had gained perfect political foresight 12 months ago—foreseeing the Brexit vote, a Trump presidency, a Macron victory out of nowhere in France, a coup in Turkey and a challenged UK election—would we have forecast record highs in global stock markets? The point of the question was to remind us of the perils of prediction, and of the huge disconnect between politics and markets—or, as she said, the “front and back pages of the newspaper.”

She noted that we live in enormously volatile times, and rather than expecting a reversion to the mean, we should instead be preparing for a continuation of dizzying change in the world, led by a broad rejection of the status quo.

Minton Beddoes offered the audience a whistle-stop tour of the globe. A synchronized global upturn has buoyed markets, aided by stability and improvement in the emerging world, and a return of “animal spirits” to U.S. markets. The Trump presidency has so far not delivered on extreme fears or hopes—in Minton Beddoes’ words, on the fears of “Dark Donald” or the hopes for a “latter-day Reagan.” Investors were not spooked by the former initially, looking more to the potential benefit of infrastructure stimulus, tax cuts and regulatory relief. She commented that so far, the new administration has not produced meaningful detriment or benefit to the global or U.S. economy, and businesses in the U.S. are largely undistracted by the theatre in Washington. 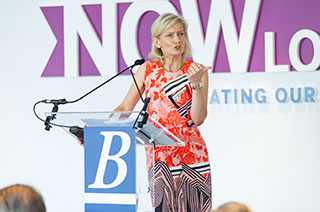 ​Minton Beddoes was far from sanguine regarding the U.K. and focused some discussion on the upcoming Brexit negotiations—we note here that The Economist has long been a standard-bearer for internationalism, especially in reference to the U.K. In her view, the country’s government is ill-prepared for the impending talks, with constructive conversations largely stalling in recent months as the countdown clock continues to tick. Signs of weakness in the U.K. economy and a general election that only emphasized the divided views of the public were adding to a “febrile” popular mood as the government attempts to carve a path forward. Minton Beddoes left the topic with the suggestion that the country may have been caught “on the crest of the populist wave”—just as it was potentially subsiding elsewhere.

Even so, she believes that the prospects for Europe overall have improved. A Macron victory has stemmed a broad nationalist surge for the moment, and a Franco-German alliance has the potential to bolster the Eurozone and solidify its strategic importance. Meanwhile, the economy has picked up some steam, and some genuine signs of reform momentum could mean progress in areas like labor legislation. 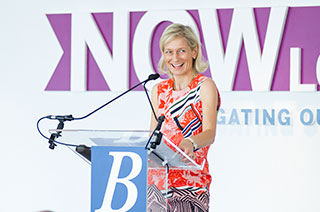 In her closing remarks, Minton Beddoes pushed our time horizons out to the long term. When historians look back at the first 20 years of the 21st century, they will note many things, such as a huge financial crisis, the emergence of China as a true global power, a demographic shift in developed markets and, possibly dwarfing all these factors, a period of enormous technological change. Drawing parallels with the industrial revolution in the late 1800s, Minton Beddoes noted that we may yet see wholesale shifts in society of a similar scale, with major disruptions to the industries and ways of life to which we are accustomed, and major changes in the role of the state.