Strong Defense: The Falling Opportunity Cost of Allocating to Bonds

For years, “defense” in portfolios—i.e., allocations to cash and core fixed income holdings—has meant a willingness to accept extremely low returns. But after many years of economic recovery, we finally have reached a point where defensive allocations once again provide a reasonable yield.

Many noisy political topics have dominated the investment discourse in 2018, but underneath that noise and volatility, the drum beat of rising interest rates in the U.S. has been steady and consistent. After nearly a decade sitting near zero, the effective Fed Funds Rate (as tracked by the St. Louis Fed) rose above 50 bps at the end of 2016, and since then has ticked up to 180 bps as of June 30, 2018. While still low by historical standards, the Fed’s hiking has spurred rates elsewhere (the 10-year Treasury yield briefly poked above 3% in April, and now sits between 2.8% and 2.9%). 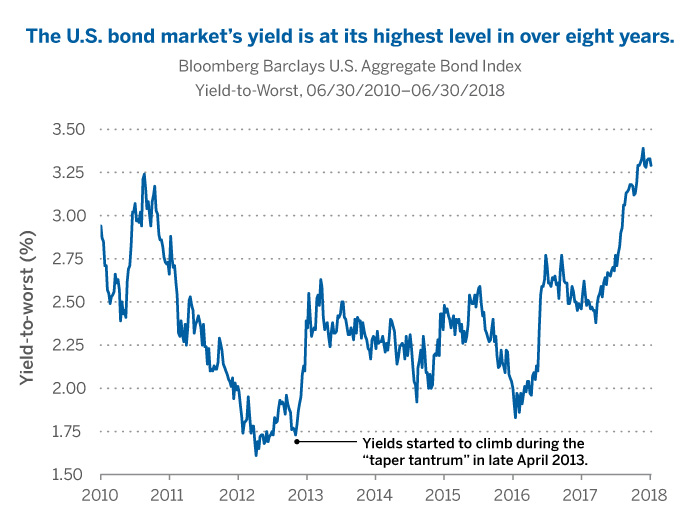 As a result, it may make sense for investors to consider decreasing equity allocations and increasing fixed income allocations within their portfolios. (As always, such decisions are highly dependent on a given investor’s specific circumstances.)

Three Factors Supporting a Shift from Equities to Bonds

We still believe that equities offer healthy opportunity, and the fact that the current economic expansion is simply “old” has never been a sufficient reason for us to lose confidence in it. But beyond the economic cycle’s age, several factors suggest that a more defensive mindset is worth considering: 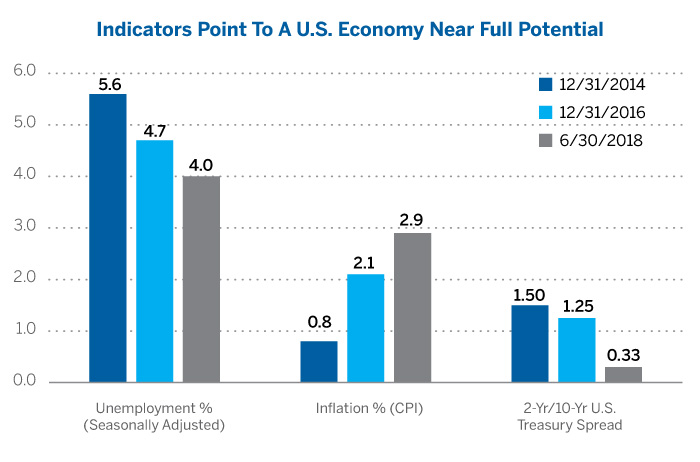 With all of this in mind, we believe that bonds have gained some ground on stocks in terms of the risk and potential reward each asset class represents. The opportunity cost of defense is lower today than it has been in many years.

Yield-to-Worst (YTW) is the lowest potential yield that can be received on a bond without the issuer actually defaulting. The YTW is calculated by making worst-case scenario assumptions on the issue by calculating the return that would be received if the issuer uses provisions, including prepayments, calls or sinking funds. This metric is used to evaluate the worst-case scenario for yield to help investors manage risks and ensure that specific income requirements will still be met even in the worst scenarios.
Bloomberg Barclays U.S. Aggregate Bond Index is a market capitalization-weighted index, meaning the securities in the index are weighted according to the market size of each bond type. Most U.S. traded investment grade bonds are represented. Municipal bonds, and Treasury Inflation-Protected Securities are excluded, due to tax treatment issues. The index includes Treasury securities, Government agency bonds, Mortgage-backed bonds, Corporate bonds, and a small amount of foreign bonds traded in U.S.
Bloomberg Barclays Indices are trademarks of Bloomberg or its licensors, including Barclays Bank PLC.
BLOOMBERG, BLOOMBERG PROFESSIONAL, BLOOMBERG MARKETS, BLOOMBERG NEWS,BLOOMBERG ANYWHERE, BLOOMBERG TRADEBOOK, BLOOMBERG BONDTRADER, BLOOMBERG TELEVISION, BLOOMBERG RADIO, BLOOMBERG PRESS, BLOOMBERG.COM and BLOOMBERG LAW are trademarks and service marks of Bloomberg Finance L.P., a Delaware limited partnership, or its subsidiaries