Concerns over trade policy and potential trade wars have rattled equity markets in recent months. In this article, our head of asset allocation discusses how we are managing trade risk, while still embracing global growth opportunities in our portfolios.

After an unnaturally serene 2017, volatility roared back into equity markets this year, fueled by worries over interest rates, inflation, tariffs and data privacy.

The developing story around trade and tariffs has especially vexed investors. Markets have been rattled by the possibility of an all-out trade war, and investors are anxious about the uncertain impact of various tariffs on specific industries and companies. We identified this trade scenario as a key risk for 2018 in our annual outlook publication, Confronting the Unknown, and the issue has become a prominent one in the early part of the year.

It is hard to gauge the broader potential impact of tariffs when policy is developing so quickly, but there are valid reasons for concern. The tariffs announced so far affect a very small slice of the global economy, but we could see an escalation into a broader set of trade barriers between China and the U.S., or into an ever wider series of policy shifts that erect barriers all over the world. These scenarios may seem unlikely, but they are certainly within the realm of possibility.

We know that there are divergent opinions about the wisdom and likely impact of tariffs. But companies dependent on foreign trade—most notably, the multinational companies that dominate many stock indexes around the world—have thrived in a world with low trade barriers, and they are likely to suffer if trade barriers rise.

As a result, our portfolios currently seek exposure to asset classes and holdings with less dependency on foreign trade. We have long concentrated our emerging market allocations on domestically focused consumer companies in Asia. We currently emphasize small-cap stocks in our overall U.S. equity weightings, again due to the fact that small caps tend to be more domestically focused. Finally, we are carefully monitoring our European allocations—we see a great deal of opportunity in that market but acknowledge that European multinationals are vulnerable in a full global trade war scenario.

Over the past century, trade barriers declined dramatically. From a peak rate of 20% in 1930, the U.S. aggregate trade-weighted tariff rate declined to less than 2% by the early 2000s. A rapid increase in foreign trade has fueled global economic growth, and multinational companies have flourished in this environment.

However, populist sentiment in the U.S., U.K. and elsewhere has turned against globalization. Because trade is a major driver of global growth today, equity markets are highly sensitive to signs of a return to protectionism, such as the tariffs being discussed in early 2018.

The market is trying to digest how businesses will be impacted, but stock markets simply haven’t faced rising trade barriers in a very long time. Should we brace for the impact of the infamous 1930 Smoot-Hawley Tariff Act, which led to a contraction in global trade and exacerbated the Great Depression? Or are the steel tariffs of 2002 a better indicator of what we should expect—an orderly, low-impact process resolved by the WTO in fairly short order?

The media is focusing a lot of attention on tariffs proposed by the U.S., but what really matters is how other countries respond going forward. A variety of scenarios are possible. U.S. actions could spur new rounds of negotiation that produce new policy and end the tariff escalation. Other nations could directly retaliate with barriers aimed squarely at trade with the U.S. Finally, there is potential for an all-out trade war, in which other countries follow the example of the U.S. and move broadly to protect their markets from imports.

Many people are trying to guess which of these scenarios will come to pass, but guesswork is a poor platform for investment decisions. We need to build portfolios on a foundation of facts.

FACT: The tariffs announced so far in 2018 affect a small sliver of the global economy.

The chart below summarizes the formal tariff announcements and informal “proposals” from the U.S. and China in 2018, through early April. The story so far contains two contradictory themes. We have a clear and public pattern of escalation that hints at severe consequences—alongside a series of policies that are unlikely to have much actual impact on trade or the economy.

U.S. imports of washing machines and solar panels (see chart below) in 2017 accounted for approximately 0.4% of total imports. Steel and aluminum are more meaningful but still only represent 2% of imports, and the new policy currently exempts countries that represent about 70% of those imports (China, notably, is not exempted). The announcements in late March and early April were precise responses from China and the U.S., aimed at each other; current tariff packages being discussed could impact $50 billion in U.S. exports and more than $150 billion in Chinese exports. From a U.S. perspective, these tariffs impact a meaningful portion of trade with China but represent a smaller percentage of overall U.S. foreign trade (which totaled about $1.5 trillion in exports and $2.3 trillion in imports in 2017) and an even smaller slice of U.S. GDP (more than $19 trillion in 2017). The view from China is similar—the tariffs proposed so far do not affect enough trade to meaningfully threaten China’s economy.

As stated previously, the concern with regard to trade policy is mostly about how it evolves from these initial salvos. The amounts currently on the table are not big enough to significantly impact global economic health, in our view.

The U.S. has announced several protectionist trade policies in 2018, all of which target trade with China to some extent. China’s responses have been pointed but controlled, and so far, none of the proposals from either side threaten a large segment of U.S. or Chinese GDP. Even so, equity markets are agitated by the situation and its potential to escalate. 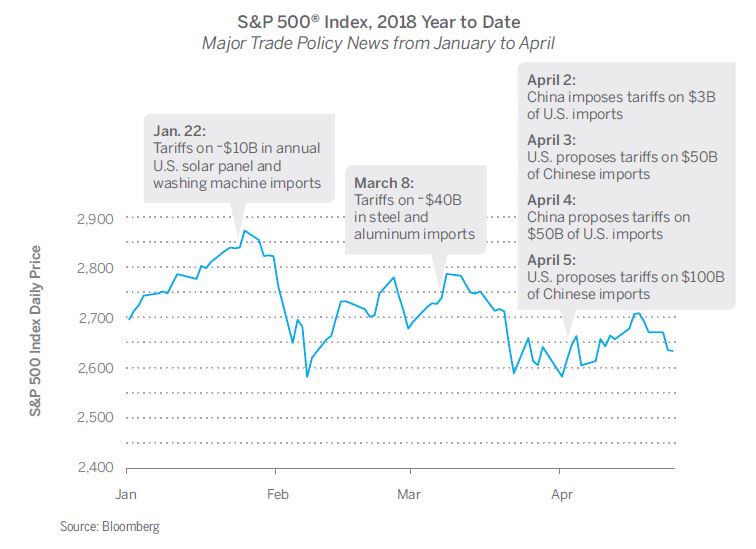 If trade barriers continue to rise, companies with a lot of cross-border business are at risk. Many of the tariffs recently proposed are in the 25% range—tariffs of that scale can easily spell the difference between profit and loss, and could drive successful competitors out of some markets entirely.

Reported corporate information regarding sales by region is far from perfect, but we have enough to paint a reasonable picture. Within the S&P 500 Index, a bit over 40% of overall company revenue comes from “foreign” sources (in most cases, but not all, Index constituents are U.S.-domiciled firms).

Certain sectors and companies are notably vulnerable to tariffs. The energy, technology and materials sectors each broadly earn more than half of revenues from foreign sales. At a company-specific level, a number of firms have already sold off on fears of tariff impact. Boeing gets half its sales through exports, and other firms like Caterpillar and John Deere are also major exporters. Apple earned more than 20% of its revenue from China in 2017, and about 15% of Tiffany’s overall sales stemmed from Chinese exports. Many of these sectors and companies sold off at some point in early 2018 on tariff worries.

Of course, our concern is not short-term market jitters—we are interested in the potential long-term impact of tariffs on earnings. But we believe that in most scenarios involving higher trade barriers, the earning power of multinationals is generally at risk.

HOW WE ARE POSITIONED

As we noted in our Confronting the Unknown publication, we have oriented portfolios to mitigate our exposure to companies dependent on foreign trade.

For now, the U.S. is at the center of the trade policy maelstrom. U.S. multinationals are most at risk. If U.S. trading partners retaliate against the administration’s policies with U.S.-specific tariffs of their own, U.S. multinationals would suffer from any damage to the U.S. economy as well as from the trade barriers being erected by other countries. Within our U.S. equity allocations, we are tilted away from large caps and toward small caps, to emphasize companies with a greater domestic focus.

In our view, companies with lower U.S. orientation are less at risk, at least at the moment. In emerging markets, we have long sought to own (through our chosen emerging market managers) smaller, domestically focused companies, especially those that target their own country’s growing consumer markets. Our European investments definitely include a large allocation to multinationals. These companies are far less exposed than U.S. multinationals to the tariffs currently on the table.

If the current situation escalates into a global trade war (in which other countries follow the lead of the U.S. and establish broadly protectionist policies), then European and Asian stocks could be generally vulnerable, as the economies in those regions are quite dependent on trade. When we consider the compelling growth and attractive valuations we see in Europe and in emerging markets, we are willing to accept some trade-related risk in order to embrace the opportunity in those regions. But we are carefully monitoring our exposure in Europe and Asia, and for some time, we have been slightly underweight equities in general, as trade and other geopolitical issues are, in our view, elevating the overall risk level in the global equity market.

The trade situation is developing rapidly, but we hope to convey that in this situation, as with any other, we are trying to avoid speculation, focusing on the facts, and pursuing a favorable balance of opportunity and risk with all of our portfolio decisions.

The information provided in this material is not intended to be and should not be considered to be a recommendation or suggestion to engage in or refrain from a particular course of action or to make or hold a particular investment or pursue a particular investment strategy, including whether or not to buy, sell, or hold any of the securities or asset classes mentioned. It should not be assumed that investments in such securities or asset classes have been or will be profitable. To the extent specific securities are mentioned, they have been selected by the author on an objective basis to illustrate views expressed in the commentary and do not represent all of the securities purchased, sold or recommended for advisory clients. The information contained herein has been prepared from sources believed reliable but is not guaranteed by us as to its timeliness or accuracy, and is not a complete summary or statement of all available data. This piece is intended solely for our clients and prospective clients, is for informational purposes only, and is not individually tailored for or directed to any particular client or prospective client. Private investments mentioned in this article may only be available for qualified purchasers and accredited investors. All charts, economic and market forecasts presented herein are for illustrative purposes only. Note that this data does not represent any Brown Advisory investment offerings.

Any business or tax discussion contained in this communication is not intended as a thorough, in-depth analysis of specific issues.