China: The Next Frontier In Venture

In Thomas Friedman’s award-winning 2005 book, The World Is Flat, he highlighted how globalization had leveled the playing field, offering all competitors an equal opportunity. The book focused heavily on outsourcing and offshoring, which were dramatically changing industrial manufacturing in the U.S. at that time. While “real world” businesses were facing fierce competition and disruption, the “new world” business arenas of technology and the internet were largely immune, as U.S. stalwarts like IBM, Intel, and HP flourished as undisputed champions.

In the 15 years since that book was published, global competition has left few industries untouched; venture capital and the technology industry are no exceptions. While innovation has long been associated with Silicon Valley and a U.S. ecosystem, we now see increased global competition, including the impactful emergence of China.

For decades, the U.S. has been the epicenter of global venture capital investing. With powerhouse companies like Apple, eBay and Uber emerging from Silicon Valley, one could easily be content with a U.S.-centric portfolio. As an old saying in the oil industry goes, “the best places to find oil are in spots where it’s already been found.” Many venture portfolios take a similar approach, concentrating their bets around geographies and markets that have shown past success. But rather than simply chasing after past winners, experienced investors know to look for the core factors that allow these startups to flourish: capital, talent, and customers.

Based on capital alone, we can see that the playing field has changed dramatically. What was once almost exclusively a U.S. industry is now a global phenomenon. Per The Wall Street Journal, in 1990, over 90% of the global capital invested in venture was in the U.S., while China’s share was negligible. By 2018, the U.S. figure ad dropped to 45%, while China’s had risen to 32%. 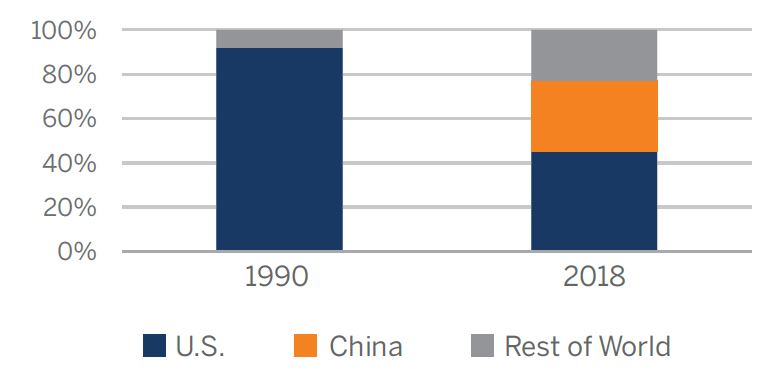 While essential, financial capital alone does not lead to venture success; it is often not even the catalyst for innovation. Successful startups are all about human capital—entrepreneurs with enough vision, passion and drive to overcome the countless obstacles they will encounter.

Part of what made Silicon Valley such a successful environment for startups was its deep academic talent pool and high density of technology companies. But California and the U.S. do not have a monopoly on academic talent. Though China’s on-ramp to economic prosperity was cheap labor and manufacturing, its government set ambitious goals to move up the value chain and become a global leader in technology. Knowing it could not achieve this goal without a talented workforce, China has invested heavily in science and technology, including investments in education.

Number of University Degrees in Science and Engineering 2000-2015 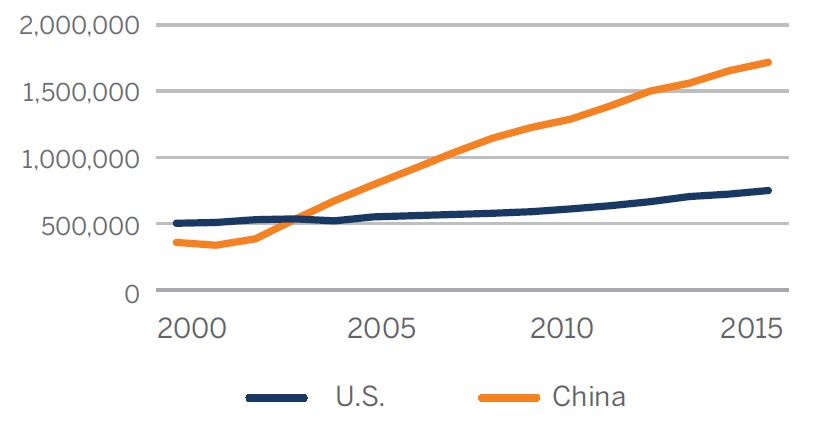 A 2016 study from the World Economic Forum showed that China now produces more STEM graduates each year than any other country—4.7 million in 2016, for example, compared to only 568,000 in the U.S. The BBC reported in 2016 that China was building nearly one university per week, and projected that the number of 25-34 year old university graduates in China would quadruple by 2030. 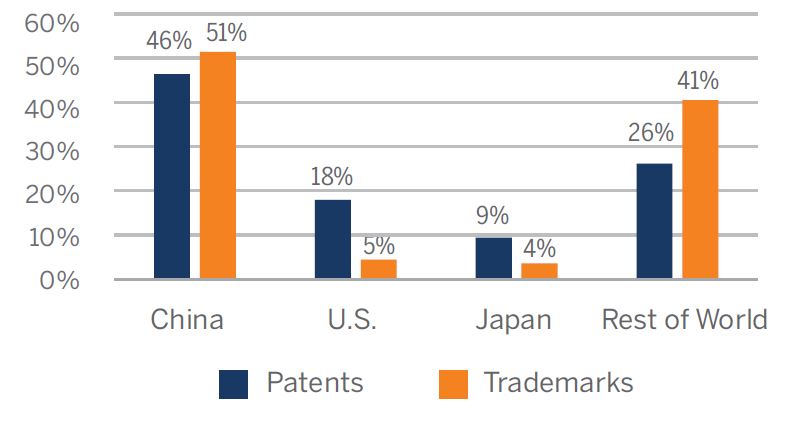 As these students move from academic life into their careers, they are having a big impact on China’s economy and its ability to innovate. Per the World Bank, from 1999 to 2018 China’s GDP per capita grew from $873 to $9,770—an annual growth rate of almost 13%. While China’s GDP growth has been impressive, its innovation economy has grown at an even more rapid pace. Take patent applications as an example. The World Intellectual Property Organization reports that in 1999, China filed almost 50,000 patent applications; by 2018, that number grew to more than 1.5 million, representing 20% annual growth and a thirty-fold increase over that period.

Looking beyond measures of growth within the country, China is now setting the pace for global patent and trademark applications as well. China’s 1.5 million patent filings and 7.3 million trademark filings in 2018 represented 46% and 51% of worldwide totals, respectively.

Furthermore, according to The South China Morning Post China has focused its resources. Potentially modeled after the success of Palo Alto and Silicon Valley, China established Zhongguancun in Beijing as the epicenter of its technology movement. First recognized as a high-technology industry and development experimental zone in 1988, a year later it launched its first technology business incubator. Today it is home to over 9,000 high tech firms, nearly half of China’s unicorns (startups with a valuation in excess of $1 billion), and is in close proximity to two of China’s most prestigious universities, Peking University and Tsinghua University. As recently as 2018, The South China Morning Post reported that this dense ecosystem was launching as many as 80 new technology startups every day.

Monthly Users as of March 2020 (millions) 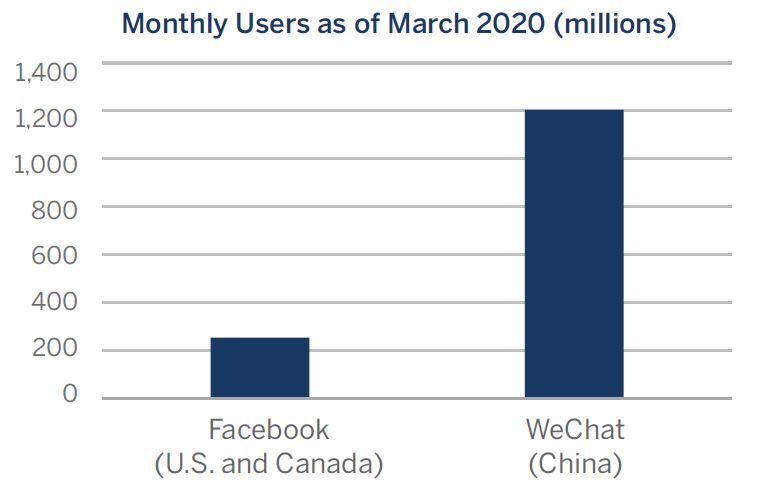 New startups face the same fundamental challenge wherever they are started: To succeed, they must develop a product or service that attracts customers. China has a natural advantage on this front, given the sheer size of its domestic population. Per Statista, China has three times as many mobile Internet users than the U.S., and almost nine times the number of mobile payment users. In a relatively short period of time, China has become an enormous market for social media, mobile transactions, AI, and more.

Consider electronic payments data from Statista. In the fourth quarter of 2019, PayPal, a leading provider in the U.S., processed $2.2 billion of average daily payment volume; Alipay, a Chinese mobile and online payment platform, processed over $50 billion. Facebook dominates the U.S. social media arena with 253 million monthly users in North America as of March 2020. WeChat, a Chinese social media and messaging app, had over 1.2 billion monthly users during that same period.

Beyond scale, Chinese entrepreneurs can also benefit from government assistance and the implementation of many pro-innovation policies. In the U.S., citizens enjoy strong personal liberties and laws that protect their individual privacy and civil rights. While these principles of trust and liberty are sacred in the U.S., they can occasionally slow the pace of innovation as technology startups bump up against regulations. In contrast, Chinese laws are more lenient; putting aside questions of civil liberties, conditions in China can allow for accelerated data collection and provide an advantage in developing new technologies. These advantages are especially apparent in fields like artificial intelligence and facial recognition, where large amounts of data are needed to produce functional models. As the future of technology speeds towards artificial intelligence and the Internet of Things, China’s ability to amass huge sets of data and use them more flexibly could position the country to square up against the U.S. for global dominance.

A deep talent pool, access to capital, and a large addressable market help plant the seeds for success. Similarly to how China rose to global dominance in manufacturing, these factors could become an avenue for China to emerge as a global technology leader. As the world’s largest country continues to grow and innovate, a portfolio of venture capital investments with exposure to China could be well-placed to ride the wave and reap the rewards of a generational change.

While the outlook of this piece is positive on China, we are mindful of certain risks that are unique to investing in the region, including centralized government control, regulatory differences, and different governance models. As a result, we have intentionally moved slowly and have introduced illiquid Chinese investments into client portfolios at a measured pace. This remains an active area of research; we are optimistic that we will continue to find additional venture opportunities in China that are suitable for client portfolios.

The information provided in this material is not intended to be and should not be considered to be a recommendation or suggestion to engage in or refrain from a particular course of action or to make or hold a particular investment or pursue a particular investment strategy, including whether or not to buy, sell, or hold any of the securities mentioned. It should not be assumed that investments in such securities have been or will be profitable. To the extent specific securities are mentioned, they have been selected by the author on an objective basis to illustrate views expressed in the commentary and do not represent all of the securities purchased, sold or recommended for advisory clients. The information contained herein has been prepared from sources believed reliable but is not guaranteed by us as to its timeliness or accuracy, and is not a complete summary or statement of all available data. This piece is intended solely for our clients and prospective clients, is for informational purposes only, and is not individually tailored for or directed to any particular client or prospective client.