Forget the Machiavellian notion that the best defense is a strong offense. Amid persistent instability in geopolitics and global finance, an investor in equities can both limit risk and find opportunity with a targeted stake in the defense industry.

An investment in defense contractors—which tend to perform independently of economic growth—provides diversification that could help buffer a portfolio against setbacks from a slowing global expansion. Demand in the sector is robust, with several governments boosting defense spending in response to terrorism, tension or outright conflict in East Asia, the Middle East and Ukraine, and the increasing sophistication of weapons produced by Russia and China.

“Western military technological superiority, a core assumption of the past two decades, is eroding,” according to John Chipman, chief executive of the International Institute for Strategic Studies (IISS). Most notably, Russia and China are challenging Western democracies with advances in ballistic and cruise missiles, combat aircraft, air defense systems and armored vehicles, according to London-based IISS, a think tank focused on global security and military conflict.

To be sure, some investors may not want to own defense companies and the industry is not without risks. Although stock prices for arms makers tend to rise during an election year as candidates talk up national security, such jawboning does not prevent post-election cutbacks in defense in response to public pressure for austerity. Low oil prices may also inhibit demand from some of the world’s biggest F arms importers such as Saudi Arabia. Moreover, low correlation with the economy means that defense industry stocks would probably lag other industries during a boom. In our view, though, these risks will not meaningfully halt the industry’s tailwinds:

Regional tensions. China, North Korea, Russia and Iran show no signs of scaling back ambitions to build their regional clout. Despite a recession, Russia expanded defense spending last year at a faster rate than any other major military power. Its $65.6 billion budget for 2015 equaled roughly 5% of gross domestic product, according to IISS. From 2009 until 2015, China annually boosted its defense budget by $10 billion to $15 billion, spending $146 billion last year.

Rearming democracies. In response, the U.S., Europe and major weapons importers, including India, Japan and South Korea, are stepping up spending. For fiscal year 2016, the U.S. increased its defense budget for the first time in eight years. The Pentagon, which accounts for more than 80% of arms makers’ revenue, plans to boost its discretionary budget authority by 4.4% to $585.2 billion in fiscal year 2021, from $560.4 billion in fiscal year 2015. Many European countries have restored military outlays on a growth trajectory, while Japan and South Korea have announced plans to buy several squadrons of F-35 jet fighters.

“I can’t think of a time when our international pipeline of opportunities was more robust than it is today,” according to Tom Kennedy, CEO of Raytheon, maker of torpedoes, laser-guided bombs and the Patriot missile defense system. International sales during the second quarter surged 8%, Kennedy said in a July 28 conference call with analysts. 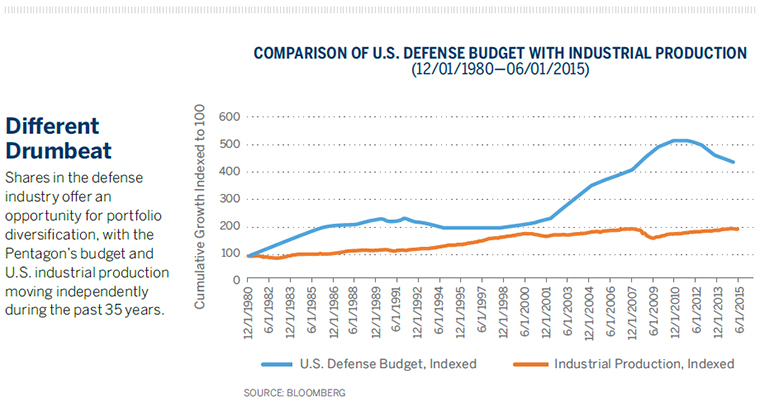 General Dynamics is benefiting from stepped up funding for the construction of U.S. destroyers and Virginia-class nuclear-powered attack submarines. It is also developing a replacement for Ohioclass ballistic missile submarines, which were first commissioned in 1981. An order backlog totaling 19,000 for the company’s combat vehicles—including the eight-wheel Stryker and the Abrams battle tank—is equivalent to 3.4 times annual production as of December.

General Dynamics sells at a price-to-earnings ratio of 15, which is meaningfully lower than the average of its rivals focused only on defense: 18. The discount stems largely from investor pessimism over the company’s Gulfstream jet business. Orders for business jets from corporations and affluent individuals have declined in recent years, largely because of weakness in emerging markets, especially Russia and China, where demand had been strong. Orders waned partly because of an anti-corruption campaign in China and financial sanctions against individuals allegedly backing efforts to destabilize Ukraine.

We believe the decline in demand for the company’s large-cabin business jets—widely deemed to be the top in the industry—will probably be shorter than most investors anticipate. Indeed, we are hoping that shares of General Dynamics will rise as the company rolls out two new models of high-end jets and continues to gain market share. A two-year backlog for the Gulfstream G-650, the company’s flagship aircraft, also mitigates some of the downside risk.

In a time of persistent geopolitical tensions, we believe that defense industry stocks offer the prospect for meaningful gains and a countercyclical buffer against weakening global economic growth.