EUROPEAN RE-ENTRY: Why We Are Shifting Portfolios Toward European Stocks

Asset allocation—at least for us—is an exercise in nuance. We move slowly and carefully when it comes to shifting our portfolios away from one asset class or region and toward another. This approach is due to the value we place on patient and disciplined decision-making, especially in light of factors that must be evaluated in shades of gray, not black and white.

Take Europe, for instance. Since the 2008–09 credit crisis, market sentiment on European stocks has shifted back and forth, from despair to confidence, depending largely on sentiment regarding the EU’s prospects as a viable political and economic entity. Throughout this period, we often saw windows in which we believed that European valuations were more attractive, but we were cautious due to Europe’s high debt levels and struggles to generate economic growth. (Note the titles of some of our articles on Europe in recent years, such as “Road to Recovery,” “Continental Divide” and “Europe’s Slow Climb.”) Thus, we consistently maintained a reduced weighting in European equities in the years since the crisis (relative to the blended benchmarks typically used by our clients to measure portfolio results).

Over the long term, that stance has paid off. We maintain a model portfolio internally to track the results of our asset allocation stances. In that portfolio, our underweight to European stocks has been a strong contributor to our returns; in fact, since the model’s inception on Sept. 30, 2010, this underweighting was the largest positive contributor to the model’s relative performance out of all of our asset allocation decisions.

But after more than six years, we are ending this stance, and recommending a return to a neutral weighting in European stocks. Again, this is a nuanced shift in our thinking, rather than a drastic one; “let’s take a neutral position” is hardly a rallying cry. But it is a meaningful change worthy of discussion after a long period of time.

We have a number of reasons for our renewed comfort level:

Improving economy: The weakness of Europe’s macroeconomic outlook in recent years was one of the primary red flags we saw for European stocks. The 2008–09 global credit crisis, the ongoing debt crisis in Greece and other concerns have led to multiple years of austere economic policy in Europe, dampening growth prospects.

However, global growth trends are improving broadly, and economic indicators in Europe have steadily improved since the middle of last year following the Brexit surprise. We emphasize leading indicators when developing our economic outlook, including purchasing manager surveys and leading economic indicator composites. Although leading indicators are typically built on “soft” data that measure sentiment, they have proven over time to be much more helpful in predicting recessions and GDP movement than the “hard” data of economic results. As noted in the chart to the right, purchasing manager sentiment has improved notably in Europe over the past year, and we see similar indications in other statistics we track.

Additionally, we believe that tail risks in Europe have eased of late. Recent political events have shaken confidence in the EU, but the victory of Emmanuel Macron over far-right candidate Marine Le Pen in France’s presidential election assuaged fears of a French exit from the EU, an event that likely would have triggered market volatility and heightened uncertainty. (The French election continued a recent trend—in several elections this year across Europe, the nationalist candidate lost and underperformed vs. expectations.) Collectively, the data and indicators we study suggest a reduced risk of recession in the region.

Further, we see room for the European economy to grow. Broad unemployment remains well above pre-crisis levels, low inflation should encourage the European Central Bank to maintain loose monetary policy, and broadly, there is far greater slack in the economy in Europe than in the U.S. This may bode well for European stocks; while we can’t predict the specific movements of any economic cycle, we know that in general, we want to invest when leading indicators are improving but before an economy has fully recovered. 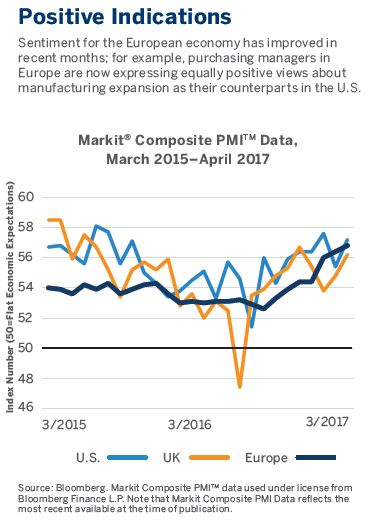 Better valuations: A key driver of our improved view on European stocks is simply that prices and valuations for those stocks are currently much more attractive to us than what we see in U.S. stocks.

Most investors look at price-to-earnings (P/E) ratios as their gauge of stock valuation, and by this metric, the disparity between Europe and the U.S. is not particularly notable. European stocks have traded at lower P/E ratios than U.S. stocks since the middle of 2004. While the gap between the two has widened in the past few years, it has not widened dramatically. However, when measuring valuation using EV/EBITDA (enterprise value divided by earnings before interest, taxes, depreciation and amortization), a metric that we consider to be more accurate and helpful, the divergence of Europe from the U.S. is much clearer. As noted in the chart below, European stocks were trading 12% cheaper than U.S. stocks as of the end of 2015 on an EV/EBITDA basis; that gap widened to 20% by the end of April 2017.

This widening discount is less a function of European stocks becoming cheaper and more a function of U.S. stocks growing more expensive. Nonetheless, the disparity is a key factor in our decisions about how to allocate capital between the two regions.

Currencies: Our analysis shows that between 1978 and 2014, currency movement explained 50% of the U.S. dollar returns of European stocks. We cannot predict the near-term movement of currencies—and we do not believe that anyone can do so consistently—but we also cannot ignore the importance of this factor. All we can do is look at a range of economic scenarios and seek to understand which currency appears favorably positioned from a currency perspective at any given moment in time.

All else being equal, U.S. dollar-based investors will see weaker performance from their European stock holdings when the dollar strengthens vs. the euro. For example, if a French stock rose by 5% in France but the dollar gained on the euro by 10% during that period, a dollar-based owner of that stock would see a 5% decline in that stock in dollar terms. This has been the reality for much of the last few years: The dollar, buoyed by a recovering U.S. economy, and expectations for higher inflation and future Fed hikes, has strengthened considerably vs. the euro. This has led to the euro falling to historically low levels vs. the dollar in purchasing power parity (PPP) terms. (Think of PPP as the equilibrium point where a dollar would buy an equivalent basket of goods and services in the U.S. and in Europe.) As of March 31, 2017, the euro was undervalued by 25% vs. the dollar in PPP terms—meaning that a dollar could buy 25% more in Europe than it could in the U.S. We have not seen that much of a disparity since the euro first launched as the EU’s common currency. 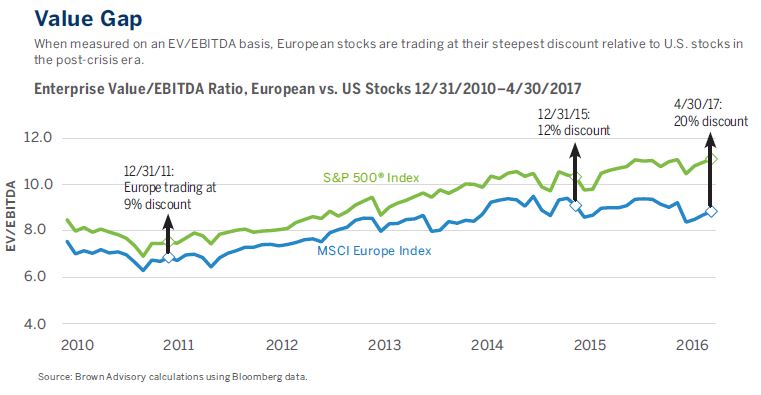 From where we are today—with the U.S. at or near the end of an extended growth cycle and with signs pointing to improving growth in Europe—we believe that dollar-based investors are more favorably positioned for investing in European stocks from a currency perspective. Again, we are not implying that we can predict the near-term direction of currency markets or the extent to which they will move; we are merely developing a high-level perspective based on recent history and current economic indications.

Opportunity to generate alpha: Finally, we note that over time, active managers focused on European equities generally have been able to add more value from stock picking than those managing U.S. equities. That has remained true in recent years, despite the macroeconomic headwinds that European markets have faced. Many of the best-performing European equity managers have outperformed their benchmarks notably in the years since the 2008–09 recession, while comparatively fewer top-performing U.S. large-cap managers have been able to beat the market consistently.

Brown Advisory’s Strategic European Equity Fund, subadvised by Wellington Management, is highly differentiated from the MSCI Europe Index. The strategy’s portfolio manager, Dirk Enderlein, focuses on high-quality companies that are market leaders globally and within Europe, and many of its holdings are poised to benefit from stronger growth in core European markets. Meanwhile, Brown Advisory’s Global Leaders strategy allocates capital across the globe but in recent quarters has added several European names, including Hiscox in the U.K., Schindler Group in Switzerland, Henkel in Germany and Safran in France. The managers of Global Leaders are generally agnostic with respect to regional allocation, but currently their research is repeatedly leading them to ideas in Europe.

To be sure, we are keeping a wary eye on Europe’s lingering issues. Europe still faces high debt levels in Greece and other countries and ongoing questions about isolationist political trends. Most importantly, Europe needs to build the promising economic sparks we’ve seen in the past year into a true flame. But with economic, currency and valuation factors all leaning in their favor, we are increasingly confident in the prospects for European equities.

The views expressed are those of the author and Brown Advisory as of the date referenced and are subject to change at any time based on market or other conditions. These views should not be construed as investment research. These views are not intended to be and should not be relied upon as investment advice and are not intended to be a forecast of future events or a guarantee of future results. Past performance is not a guarantee of future performance and you may not get back the amount invested. The information provided in this material is not intended to be and should not be considered to be a recommendation or suggestion to engage in or refrain from a particular course of action or to make or hold a particular investment or pursue a particular investment strategy, including whether or not to buy, sell, or hold any of the securities mentioned. It should not be assumed that investments in such securities have been or will be profitable. To the extent specific securities are mentioned, they have been selected by the author on an objective basis to illustrate views expressed in the commentary and do not represent all of the securities purchased, sold or recommended for advisory clients. The information contained herein has been prepared from sources believed reliable but is not guaranteed by us as to its timeliness or accuracy, and is not a complete summary or statement of all available data. This piece is intended solely for our clients and prospective clients, is for informational purposes only, and is not individually tailored for or directed to any particular client or prospective client.

The S&P 500® Index represents the large-cap segment of the U.S. equity markets and consists of approximately 500 leading companies in leading industries of the U.S. economy. Criteria evaluated include market capitalization, financial viability, liquidity, public float, sector representation and corporate structure. An index constituent must also be considered a U.S. company. Standard & Poor’s, S&P, and S&P 500 are registered trademarks of Standard & Poor’s Financial Services LLC (“S&P”), a subsidiary of S&P Global Inc. The MSCI Europe Index captures large and mid cap representation across 15 Developed Markets countries in Europe. With 442 constituents, the index covers approximately 85% of the free float-adjusted market capitalization across the European Developed Markets equity universe. All MSCI indexes and products are trademarks and service marks of MSCI or its subsidiaries.