As rising economic and political risk fuels market volatility worldwide, investors need to maintain adequate liquidity, stability and diversification to shield against any protracted economic downturn. At the same time, they should be alert to the investment opportunities that emerge amid turbulence, knowing that companies create value, and innovation and entrepreneurship generate wealth, even amid severe instability. 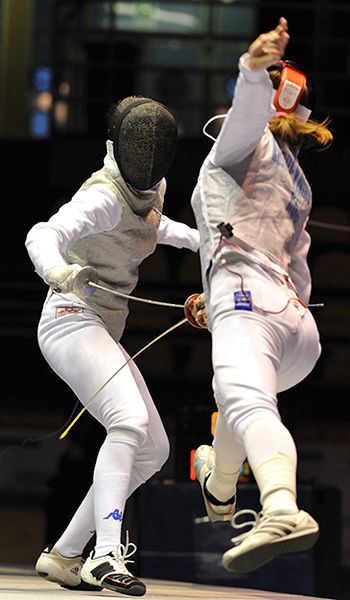 Shield or sword? More so than any other time since the financial crisis we believe that a winning investment portfolio today needs a thoughtful focus on both.

The causes for uncertainty are numerous: aggression by ISIS, weakening global growth, concerns the European Union will unravel, declining productivity, stagnant real incomes and an increasing public hostility toward globalization, or the free flow of capital, goods and people worldwide. Additionally, political uncertainty has increased with rising nativism and protectionism, and the reassertion of national borders in countries including the U.S., U.K., France and Germany. Policy built on these ideas threatens growth, and could gradually erode the economic and political underpinnings for post- World War II prosperity.

As a result, our evaluation of possible scenarios suggests that the range of positive and negative outcomes has widened during the past year. Although our analysis may sound dour, we see plenty of reason to believe that over the long term, investment markets can still generate returns for investors.

Innovation and dynamism are alive and well despite several years of low economic growth. There have been tremendous advances in worldwide communications, medicine and computing power, and some promising recent indicators such as gains in U.S. consumption, wages, equities and housing prices. History has shown that stock markets can still produce returns during periods of economic and political turmoil such as the 1940s and 1970s.

Looking ahead, for our base-case scenario we see inflation remaining moderate and most major economies continuing to grow at a modest pace. Still, with short-term volatility likely to persist, we recommend that investors build a solid defensive position through:

An ample liquidity bucket. Given the potential catalysts for an adverse period, we believe investors should maintain and regularly replenish a pool of cash to cover immediate expenses. An adequate operating account helps to ensure that an investor will not need to make ill-timed sales of securities to meet routine outlays during times of severe volatility such as the aftermath of the U.K. vote in June to leave the European Union.

High-quality, intermediate-duration bonds. These securities provide diversification from equities and yield substantially more than cash. Over the medium term, intermediate-duration bonds are relatively insulated from losses, even with interest rates historically low in the U.S. and U.K. An investor can take advantage of this low-return, lowrisk option by “rolling down” a sloping yield curve. For example, an investor can purchase a highly rated 10-year bond and hold it for three years, gaining price appreciation as the security effectively becomes a seven-year bond. This provides a meaningful boost to return in a low-yield environment and cushions a portfolio should interest rates begin to rise. (We foresee a limited risk of interest rates moving significantly higher from current levels.)

These two steps would help investors in the event of an adverse outcome. After building a bulwark against risk, investors can confidently consider going on the offensive—selectively seizing opportunities that arise amid the instability through purchases of:

Stocks with potential for earnings acceleration. In reaction to volatility and low yields, investors this year have pushed up the prices of defensive, low-growth, dividend-oriented stocks in consumer staples, utilities and telecommunications. In addition, rising commodity prices have buoyed shares in cyclical sectors such as energy, materials and industrials. Meanwhile, sectors known for their potential earnings growth have lagged, as shown by the chart on page 2. We are looking very carefully for opportunities in this growth arena, which includes technology, financials, health care and consumer discretionary stocks. 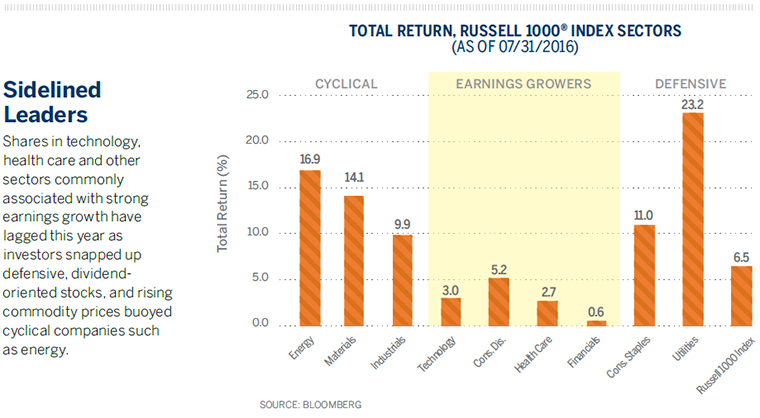 The boom in cloud computing, which has driven the share prices of Amazon, Microsoft and Google in recent years, underscores the abiding value of innovation. Maintaining liquidity allows a portfolio manager to snap up new opportunities such as General Dynamics, whose shares have risen 14% this year as of September 6.

U.S. small-cap stocks. Compared with large caps, small-cap companies generally sell at a lower price-to-sales ratio (1.1 versus 1.9 as of July 31) and generate profit margins with a greater upside potential. Because of their more domestic focus, U.S. small caps face milder headwinds from a strong dollar and from any weakness in China or the global expansion. They would also be less vulnerable to a decline in Europe’s post-Brexit vitality in our view.

High-yield bonds. The spread between the yield on benchmark Treasuries and high-yield bonds remains above the historic average even after narrowing on the recovery in commodity prices that began in mid-February. Such bonds perform comparatively well during periods of low growth and low inflation because companies often operate at a pace that is sufficient for repaying debt but below a level that would prompt an increase in interest rates. High-yield bonds are especially attractive compared with developed-market stocks, which currently sell at valuations above the historical average and face headwinds to profitability from slowing global growth and rising labor costs.

The performance of high-yield bonds during the past two years underscores how periods of turmoil open up opportunities for sizable gains. During the boom in U.S. shale oil production early this decade, energy companies found ample demand for high-yield debt among investors who believed oil would remain above $100 per barrel. The value of energy-related bonds grew to 20% of the high-yield market.

As the price of oil began to drop in 2014, investors in highyield credit grew increasingly concerned about default risk among energy companies. Market jitters increased in mid-2015 amid signs that growth was slowing in large economies—most significantly, China. (From June 2014 until February 2016, the oil price plunged 75%.) 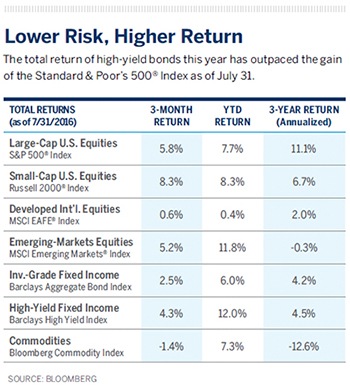 Our analysis showed that default rates were unlikely to rise significantly among issuers of high-yield debt with no involvement in energy. So when the high-yield market declined in September 2015 and February 2016, we stepped up allocations to such credit. This year through July 31, high-yield bonds as measured by the Barclays High Yield Index rose 12%, a meaningful gain on a risk/return basis compared with the 7.7% return for the Standard & Poor’s 500 Index.

While building a buffer against volatility, investors should remember that stocks have generated sizable long-term gains even during the most tumultuous decades. During the 1940s—despite a global depression, world war and the start of the U.S.- Soviet nuclear arms race and Cold War—the S&P 500 Index rose at an average annual rate of about 9%. During the 1970s—despite a toxic mix of low growth and inflation, a more than ninefold surge in the price of oil and a political crisis that culminated in the first resignation by a U.S. president—the S&P 500 Index increased at an annual average pace of about 6%.

This decade poses its own distinct set of economic challenges, many of which are aftershocks from the 2008—2009 financial crisis. Declining productivity among advanced economies has weakened global growth. U.S. productivity during the second quarter fell at a 0.5% seasonally adjusted rate, according to the Labor Department. It was the third consecutive declining quarter and the longest negative streak since 1979.

Central bank stimulus—including record-low interest rates and unprecedented large-scale bond buying by the Federal Reserve, Bank of Japan and European Central Bank—has failed to kindle rapid economic growth while posing new risks given the unconventional nature of some of these efforts such as negative interest rates.

Still, there are certain signs of strength that suggest that current headwinds will probably not halt economic growth. Business creation and innovation are strong. Applications to the U.S. Patent and Trademark Office nearly doubled from 2000 until 2015 to 630,000. Also, market economies since the implosion of mortgage finance last decade have shown resilience and renewed dynamism, with the U.S. economy alone creating 14 million jobs.

No matter how dire or shrill the media’s message may become, we will remain committed to helping our clients find the right balance between risk and opportunity, and focus on their long-term goals.