Legacy planning is all about transferring wealth to descendants as efficiently as possible. So it may be surprising to hear that a Roth IRA—a vehicle ostensibly intended for retirement income—can be a powerful mechanism for next-generation wealth transfer. Indeed, a Roth conversion has the potential to generate greater wealth than a traditional IRA during an individual’s or couple’s lifetime, and it can play a meaningful role in providing tax advantages to heirs throughout their lifetime as well. In this brief, we will review the mechanics of traditional and Roth IRAs, the rules concerning Roth conversions, and when it makes sense for families to consider a Roth conversion as a part of their legacy plans.

Since January 1, 2010, all individuals, regardless of income levels, have been able to convert existing retirement accounts such as traditional IRAs into Roth IRAs.

Roth and traditional IRAs both provide tax-free growth on invested assets to account owners, but the two options also differ in a variety of ways. From a legacy planning standpoint, two distinctions are especially important:

The decision on whether to convert a Roth is essentially a break-even analysis. Converting a traditional IRA to a Roth IRA triggers ordinary income tax on the amount converted. So, one must assess whether that meaningful upfront cost is outweighed by the future benefit offered by the Roth conversion. An important caveat: The SECURE Act, a bill seeking to overhaul retirement account rules, would reduce the lifetime "stretch" allowance for non-spousal inherited IRAs, down to a 10-year period following inheritance. Such a change would materially impact many Roth conversion decisions. The SECURE Act may pass into law later this year, and if it does we will update this article accordingly.

Paying tax now instead of later goes against the grain of conventional tax planning. However, when one’s goals are focused on legacy wealth transfer, the calculus is different. Many Roth conversion scenarios (such as the case study found later in this brief ) produce a “j-curve” effect, in which an “investment” today (in the form of the one-time conversion tax) has the potential to pay off meaningfully down the road in terms of total wealth transferred to the next generation. This benefit stems from the extended tax-free compounding afforded by Roth conversions and the lack of taxes on future distributions.

A new wrinkle for those considering Roth conversion is that “recharacterization” (i.e. the practice of “hitting the undo button” on a Roth conversion) is no longer allowed under the current tax code. This option, available before the 2017 tax overhaul, was helpful if, for example, the market declined substantially after a conversion. In such a case, one could reverse the taxes that one had paid based on a much higher account valuation, and re-establish the account as a traditional IRA once again. So Roth conversions have lost some of their tactical value as a technique for near-term tax management. However, these conversions can still have a great deal of strategic value for long-term, legacy planning, since year-to-year market volatility has less impact on scenarios that stretch over longer periods of time.

Owner Considerations: When It Makes Sense to Convert

Although the benefits can be considerable, Roth conversion does not make sense for everyone. Some factors to consider:

If the ultimate beneficiary is: 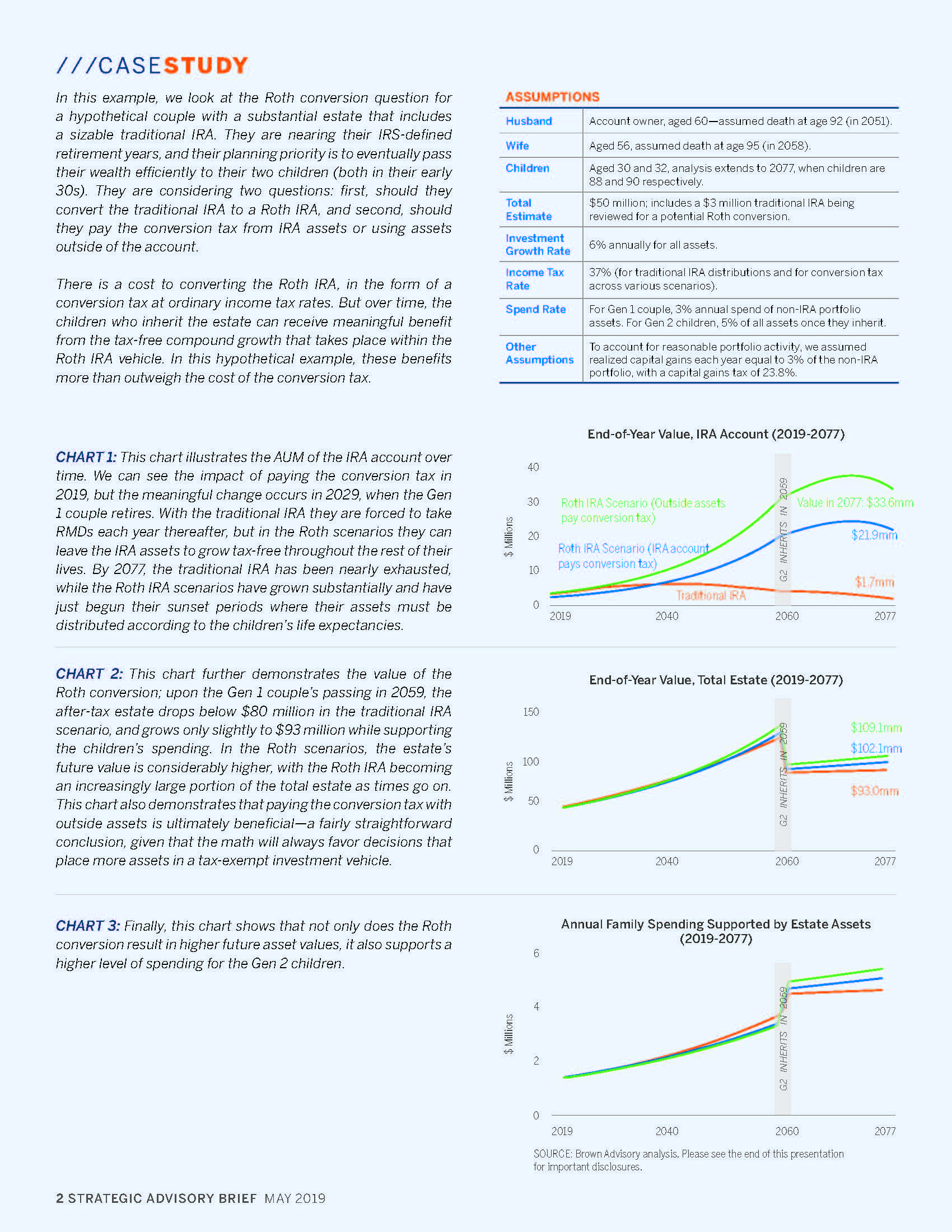 If the owner is confident that his/her state residency will be consistent, then the decisions regarding conversion can be made with greater confidence. Moving to a different state, with potentially very different tax treatment for retirement assets, may change the math governing how the decision plays out over time.

If the owner can pay the immediate Roth conversion tax, and/or future estate taxes on the Roth assets, without withdrawing assets from the Roth account, then the benefit of conversion is likely to be enhanced. By leaving more assets within the account, the owner benefits from having a larger pool of assets with the potential to grow year after year without interim tax consequences.

If the owner is likely to have a high spend rate immediately following the conversion, the benefits of conversion may be muted, as high spending could increase the time needed for the IRA to return to its pre-conversion value and reduce the impact of compounding returns thereafter. Over two generations, even small differences in a family’s spend rate may result in meaningfully different family asset pools, though the pattern of growth still holds.

In sum, converting to a Roth IRA may make sense if the owner’s state residency is unlikely to change and the owner considers wealth transfer to future generations a high priority. The ability to pay conversion taxes and eventual estate taxes from other sources outside of the IRA account could further strengthen the potential long-term benefits of converting.

The marginal rate for the top Federal income tax bracket is 37% until 2025, and will thereafter revert to the 39.6% level in place before 2017’s tax overhaul. This is one reason to consider converting in the next few years rather than waiting. Other factors that may lower your tax rate today, such as aging carryovers for charitable deductions or business losses, might also make it compelling to convert sooner rather than later.

Beneficiary Considerations: How to Receive Inheritance

Those inheriting a Roth IRA have options for the account structure in which those assets are housed going forward. (The same is true for those inheriting traditional IRAs but we are limiting this discussion to Roth beneficiaries.)

Surviving Spouse: Spouses can choose to inherit Roth assets as their own Roth IRA, or as an inherited Roth IRA for their benefit. The choice generally comes down to whether the surviving spouse wishes to use the IRA assets to support their living expenses.

If a surviving spouse wants to fund some or all of their living expenses with the IRA, he or she would be best served by moving the funds into an inherited Roth IRA account, which would then pay out required minimum distributions each year, based on an actuarial schedule determined by the IRS. When choosing an inherited IRA, the surviving spouse can also choose an accelerated distribution schedule, in which all of the assets in the Roth IRA would be distributed within five years of the original account owner’s death.

If a survivor does not plan to use the Roth IRA’s assets to fund living expenses, the best choice would likely be to roll the assets into his or her own Roth IRA account to continue the tax-free growth of those assets with no required minimum distributions during his or her lifetime. Following the surviving spouse’s death, the Roth IRA would then pass to designated non-spousal beneficiaries.

Children and Non-Spousal Beneficiaries: Non-spouse beneficiaries can open an inherited Roth IRA and take RMDs over their lifetimes. This also allows for the inheritor to designate another successor beneficiary; however, the RMDs associated with the account will always be calculated based on the original inheritor’s life expectancy (in other words, families can’t continue to grow Roth IRA assets free of taxes from generation to generation indefinitely). As with spousal inheritors, non-spousal beneficiaries can also choose an accelerated, five-year distribution schedule instead of one based on their life expectancy.

Finally, we should note that beneficiaries always have the option of taking the entire account balance as an immediate lump sum and closing the account. This option enables free use of the inherited assets but forgoes any potential future tax-free growth that would have occurred in a new Roth IRA.

Anyone can convert a traditional IRA to a Roth IRA, regardless of income level; however, if an account owner’s income exceeds IRS-determined limits (currently $137,000 for individuals and $203,000 for married couples filing jointly), ongoing contributions are not allowed. Note that in such cases, the owner(s) of the Roth IRA may still have the option to contribute to a traditional IRA, a 401(k) account, or (for those with self-employment income) a SEP IRA.

This article focuses on Roth conversion as a legacy planning vehicle, but we want to emphasize just how valuable Roth IRAs can be as wealth accumulation vehicles for younger taxpayers whose income falls within the threshold allowing Roth contributions. In addition, many 401(k) plans offer employees a Roth account option, providing the same tax benefits as a Roth IRA. Anyone who is able to contribute to a Roth IRA should carefully consider doing so, given the advantaged tax treatment those assets will receive over the course of one’s lifetime and beyond.

As noted earlier in this brief, tax law is not permanent and we never know if and when marginal income tax rates, estate tax rates and other factors may shift. Further, the decision to convert to a Roth IRA is permanent—a new development compared to prior years when such decisions were reversible. As a result, we want to reinforce the idea that Roth conversions should be viewed as a strategic decision that will play out over a very long time horizon, and not as a short-term tactical choice.

A Roth conversion can be a meaningful wealth transfer strategy—even more so if the family has the ability to pay the conversion tax from personal assets. Even if tax rates decline, or if the ultimate beneficiaries are in a lower tax bracket when funds are distributed, the family can still win over time due to the power of tax-free compound growth across multiple family generations.

We recommend that you consult your tax and investment advisors to determine whether the Roth IRA conversion strategy is right for you. We encourage you to speak to your team at Brown Advisory to discuss this important decision.

The information provided n the case study illustrates a hypothetical portfolio that is not necessarily representative of any current portfolios. The information and data contained in this report are from sources considered reliable, but their accuracy and completeness is not guaranteed and Brown Advisory cannot guarantee any specific level of performance, return, alpha, volatility, yield, or drawdown. The ability of a portfolio to achieve its investment objective depends on the ability of the underlying funds and managers to meet their investment objectives and on the advisor’s decisions regarding the allocation of the portfolio’s assets among the underlying funds and managers. There can be no assurance or guarantee that the investment objective of any portfolio or underlying fund or manager will be achieved.

Any accounting, business or tax advice contained in this communication, including attachments and enclosures, is not intended as a thorough, in-depth analysis of specific issues, nor a substitute for a formal opinion, nor is it sufficient to avoid tax-related penalties.