NOW 2017 | Cultivating the Seventh Sense: An Essential Instinct in the Age of Networks - Cloned 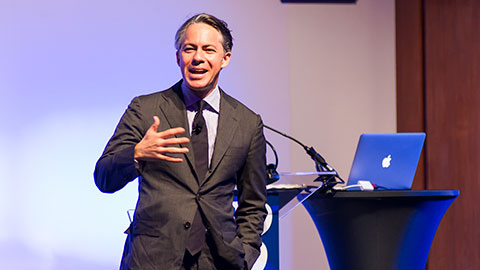 Ramo is currently the co-CEO of Henry Kissinger’s consultancy firm and a board member of Starbucks and FedEx. His business career took off in Beijing in 2002, following a distinguished tenure at TIME magazine, where he became the youngest senior editor and foreign editor in the magazine’s history. Still, he began his talk and introduced the origins of his book with an anecdote of what he referred to as “an $800 million dollar mistake.” He explained a job offer he received in the 1990s from two men “in flip-flops and shorts” who were starting an Internet company from a small warehouse in Silicon Valley. After some deliberation, he declined the offer, as he could not imagine “who in their right mind would use something called Yahoo?”

This example was the first time he had directly encountered people who clearly saw a certain set of forces that would transform the world and were preparing to act on it. He noted that Friedrich Nietzsche, when discussing the Industrial Revolution, used the term “sixth sense” to describe the instinct people needed to deal with that profound movement. Similarly, Ramo uses the term “seventh sense” to describe the frame of mind needed to embrace and master the current revolution: network empowerment. 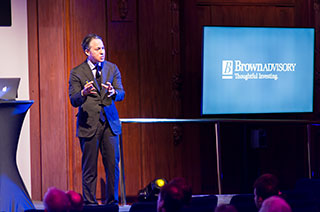 Connectivity, according to Ramo and many others, is the “unstoppable feature of our age,” defining both the huge challenges faced by existing institutions and the creative forces behind the rapid changes we are seeing. Consider that many institutions, from government to the media, are definitively less respected by their constituents than they were 10 years ago. Real-time information about natural disasters, disease outbreaks, terror attacks and other events often reveal the cracks in society’s solutions for dealing with these events. These and other factors related to connectivity are chipping away at the bedrock of traditional institutions. However, at the same time, connectivity is powering an energetic and aggressive creative energy. People and ideas are milliseconds apart where it was once days. Networks beyond a certain size become far more powerful than their constituent parts—the more people use a network, the more effective it becomes, and the more inevitable it becomes that others will join that network to gain its benefits. Many examples—from Microsoft Windows in the 1990s, to Google in the 2000s, to Facebook and LinkedIn in the recent decade—demonstrate this network effect.

Ramo concluded with a plea to the audience to try and step back and watch this broader megatrend and its impact. The nature of hyperconnectivity in the media can ironically lead us to focus on individual events as they happen, but not as part of a broader pattern. We do so at the risk of missing just how much the power of networks plays into many of the unpredictable events roiling society today.