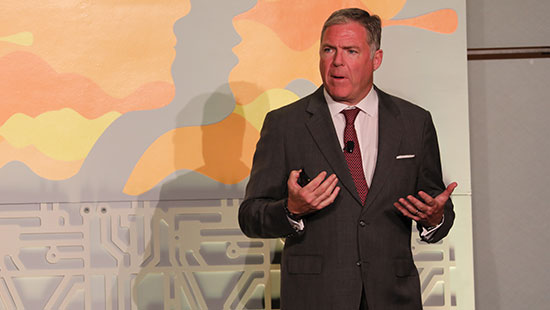 For 18 years, Matt Harrington has been studying, analyzing and synthesizing the evolution of society’s trust in four institutions: government, business, NGOs and media.

Harrington oversees global operations for Edelman, a leading global communications marketing firm that partners with many of the world’s largest and emerging businesses and organizations. Through the Edelman Trust Barometer, a widely followed online survey with over 33,000 respondents from 28 countries, Harrington and his team gather data about trends in how trust has changed over time and how people in different countries perceive their public and private leaders.

The barometer presents its findings in a series of “readings” using a scale from 1 to 100, with 100 equating to complete trust in an institution. Broadly, groups with scores of 60–100 are referred to as “trusters,” 50–59 are “neutral” and 49 and below are “distrusters.”

In his presentation at NOW, Harrington covered three themes that emerged from the 2018 Trust Barometer survey.

The U.S. and China are a world apart: The barometer identified a major split between nations where trust is rising versus others where it is falling dramatically. The most notable example: Trust in China has risen meaningfully in the past year, while in the U.S., trust has plummeted. Over the past year, China’s trust in its public and private leadership has grown the most, while the United States’ trust has fallen. Looking specifically at trust in government, China scored an 84 in its view that government will do what is right, while the U.S. scored a 33—down quite a bit from its score of 47 just last year. China views government as its most trusted institution, while the U.S. views government as its least trusted by far.

People want truth but struggle to find it: From the decline in faith in traditional journalism to the rapid rise of less reliable sources of information, trends in media have been a source of great concern to most people around the world for years. The barometer confirmed this point: The media (broadly defined in the survey to include social media platforms) emerged as the least trusted institution globally. Harrington presented examples across the world that showed a high skepticism in the news we are reading. Seven out of 10 respondents worry about false information or fake news being used as a weapon. One particularly dramatic example: the “informed public” in the U.S. (defined via income and education criteria as well as news consumption habits) scored a 68 in overall trust in 2017, but that figure plummeted to 45 in 2018, just one year later.

A surprising revelation from the 2018 survey was that 50 percent of respondents stated that they consume news “less than weekly”—this response covered traditional consumption as well as information shared by others or pushed to respondents in a feed of any type. So many people have become suspicious of the media and upset by ever-increasing political vitriol, and we have all likely come across friends or colleagues who are choosing to disengage at various levels. However, the fact that half of all respondents have disengaged from the news media to such an extreme extent is a worrying development.

People are placing their faith in new leaders: Trust in government has dropped around the world, and respondents are looking to businesses and CEOs to take a stand and lead. Sixty-four percent of respondents want CEOs to take a lead on issues of importance, rather than waiting for governments to impose change through regulation. Recently, we have seen many examples of CEOs taking a stand on a variety of issues such as diversity, guns, equal pay, sexual harassment and other issues. The survey also suggests that people want businesses to act broadly, to engage their local communities and to build trust by activating the entire organization. (As a side note, in our equity research process, we often see these leadership characteristics emerge at companies that implement successful sustainable business strategies that ultimately drive their financial results.)

The topic of trust came up many times throughout the NOW 2018 panel discussions. The Edelman barometer and Harrington’s presentation helped all of us at the conference to expand our understanding of trust and to appreciate how it is evolving differently within different demographic groups around the world.