NOW 2018 | Engaging the Next Generation in Public Service 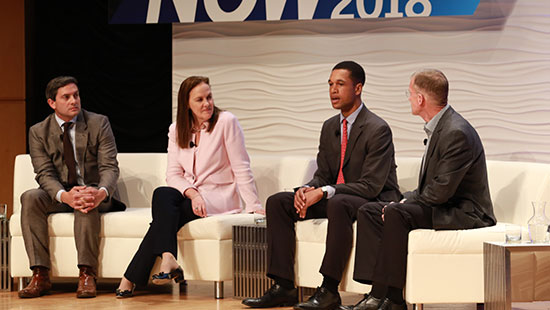 Our NOW 2018 conference dealt with a variety of forces that are tearing at the fabric of society, from social inequities, to political strife, to technological disruption. It was fitting, then, for us to close the conference with a discussion about public service and its power to bring our society together. Our panelists brought highly disparate experiences and backgrounds to the discussion, and discussed service from different perspectives, but they all found common ground in the notion that service is a powerful force that can unify communities and, importantly, enable the next generation of leaders to develop alongside the leaders of today.

Malik Jabati is a Morehead-Cain scholar at the University of North Carolina, and he has already made an indelible mark through public service, taking time away from his degree track to fight deforestation in Brazil, work with USAID on global innovation initiatives, organize a Capitol Hill conference addressing diversity in NATO militaries and work with the Obama Foundation to increase civic youth engagement. Jabati views service to the world as a personal mission. He believes many of his peers also want to be a part of something bigger but that a clearer framework from governments and institutions is needed to draw younger people into public service. He highlighted several core components of that framework, including a focus on aligning youth with missions that inspire them but also feel measurable resources for personal development and improved incentives—financial and nonfinancial—for commitments to government or nonprofit service.

Rye Barcott, a retired U.S. Marine, views public service through the lens of his military experience. He sees U.S. political polarization as an “existential threat” to the country’s ability to compete and lead globally. Barcott's organization, With Honor, provides strategic support to next-generation veterans running for office; it focuses on candidates who pledge to put principles above politics, and make specific commitments to return contributions from tainted sources, reject dishonest attack ads, and devote time and resources to work ing with opposing parties. The entire organization is driven by the idea that political service should be about service, not politics.

Michèle Flournoy, a distinguished defense expert with deep experience in government and nonprofit service, agreed that little gets done in this country without cooperation on both sides of the aisle. She discussed the need for diverse backgrounds and experiences to drive success in any organization; she views service, diversity and attracting the next generation of talent as intertwined. Diverse environments that focus on sponsorship and mentorship generally encourage exceptional performance, as do environments that create a “habit” or culture or service. Those high-performing environments also help to recruit the best and brightest talent.

Gen. McChrystal echoed the sentiments of his fellow panelists; he believes that we are all citizens of our global, national and local communities, and thus responsible to publicly serve those communities in some way. While McChrystal is widely known as one of our great modern military leaders, far fewer people know of his work leading Service Year Alliance, which seeks to make one year of full-time service a common expectation and opportunity for young Americans of all backgrounds. He sees this as an essential step in restoring political and civic responsibility in this country.

Jabati agreed with Gen. McChrystal, and added that our current connections with each other over the internet cannot replace the true connection built from personally serving alongside others in one’s community. We could not have hoped for a more powerful conclusion to the conference than watching Gen. McChrystal and Jabati—a four-star general and a 20-year-old college student—literally embodying the message of the panel by sitting together, side by side, united in their passion and devotion to the idea that public service can bring together a divided nation.