NOW 2018 | Finding Truth in a World of Disinformation 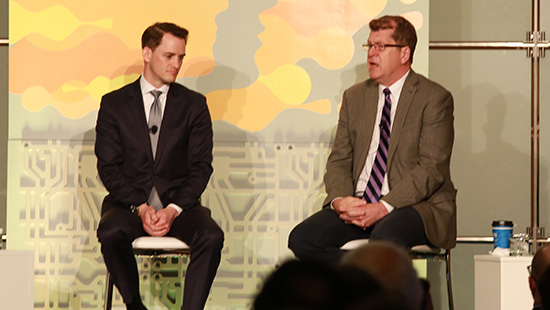 In a year when border protection is consistently headline news, it is ironic that the media is struggling with a border war of its own—specifically, the border between information and disinformation. News consumers are confronted daily with the challenge of discerning truth from falsehood. Which sources are to be trusted, when such divergent versions of reality are put forth by different media outlets, both traditional and digital, and when accusations of “fake news” and slander have become a normal reaction to any unwelcome story?

Propaganda and false news narratives are certainly not new problems—U.S. and world history is filled with examples of dishonesty in the press. But disinformation in the past was often dead shortly after arrival throughout U.S. history. “Early American newspapers—especially those engaged in politics—were full of slander and libel. But their small scale and readership meant that the regular churn would bury the stories which were untrue or lacked merit,” noted Steve Clemons, Washington editor-at-large for The Atlantic.

Today’s environment is entirely different. False stories that nonetheless feed into an audience’s predispositions or political opinions can spread like wildfire on social media, with a velocity driven by likes, views and shares. This viral media environment is without precedent in journalistic history. Graham Brookie, who leads the Digital Forensic Research Lab for The Atlantic Council (no relation to the publication The Atlantic), says that this choppy transition from analog to digital is hitting millennials particularly hard. “The youngest generation is fully digital—they’re born with a tablet in their hands. So they are the ones thrust into this transformational movement,” he noted.

Brookie's DFR Lab defends fact and truth in journalism; it conducts on-the-ground investigative journalism itself to identify and debunk instances of disinformation in media. Their specific targets include bad actors seeking to weaponize disinformation for the purpose of influencing elections or generating public support for policy initiatives.

A case study of its work: Just prior to the 2017 German parliamentary elections, a far-right German political party, Alternative für Deutschland, circulated a photo of a German woman among a crowd of darker-skinned men to evoke the spree of widely reported sexual assaults in German cities on New Year’s Eve 2015. Brookie and his team identified the photo as a complete fabrication—using a variety of analytical techniques they identified its components as images of Egyptian democracy riots during the Arab Spring, with an image of a German mode superimposed in the foreground. DFR disseminated the debunked photo through its local media partner, German magazine Bild, in advance of the election.

Facebook has been front and center in recent discussions about disinformation in politics, and both panelists underscored its central role in the modern media landscape.

“Facebook has a governance problem on their hands,” said Clemons. “Audience growth and higher user engagement is the core of its business model.” But as Facebook transforms from an internet platform into the equivalent of a global media company, it needs to take into account issues of information integrity that were not central issues in its formative years. Older media outlets remain challenged by the rapidly evolving media landscape; as advertising dollars have replaced subscription revenue as the dominant source of revenue, the approach of journalists has had to evolve. “There is still a market for marketplace for long-form, high-quality, complex journalism, but you have to earn your readers back every day,” Clemons noted.

Both speakers expressed optimism for the enduring value of objective news. But they cautioned that the consumers of news must play their part in preserving that objectivity and combating disinformation. Brookie reminded us how important it is to approach all news sources with a healthy degree of skepticism, and Clemons hopes that society can find a way to “embed in the system a premium on critical thinking in the citizenry.”