NOW 2018 | What is the Economic Impact of Political Polarization? 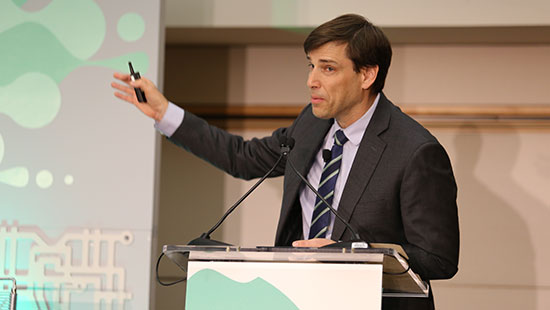 The U.S. economy has improved markedly since the 2008–09 credit crisis. We’ve had 90 straight months of positive job growth and a near-record 36 consecutive quarters of economic expansion. But while all may appear rosy on the surface, when you dig deeper, you can find some worrying trends. Ted Gayer, a leading economic thinker at the Brookings Institution, joined us at NOW for a discussion about some of these trends and how they have been exacerbated by policy and political factors.

Productivity growth has been weak in the U.S. for more than a decade—it began to decline in 2005 through the credit crisis and since then has recovered, but at a tepid pace. Despite adding workers, we’re not seeing big gains in output: “We’ve added lots and lots of jobs, but we haven’t gotten a lot of growth out of it,” Gayer noted.

Gayer homed in on a specific statistic: labor force participation for “prime-age” men (aged 25–54). Gayer noted, “In the 1940s and 1950s, if you were [in this group], you were either working, looking for work or dead. There was nothing else.” But this figure has steadily declined since World War II, from nearly 100 percent to less than 90 percent today. For several decades, rising employment for women made up the gap, but starting about 20 years ago, labor force participation among women also started to decline. Participation in other developed nations has also fallen, but the decline has been more severe in the U.S. The weakness in participation is compounded by weakness in productivity.

Many factors are weighing on productivity; Gayer commented on a few during the session. Many of us spend “2,000 hours a year or more spent watching some screen.” Nearly half of the men who have dropped out of the labor force are on pain medication, and more middle-aged men are dying from suicide and from alcohol and opioid abuse. Gayer raised other questions: Is technological advancement actually driving inequality and a shift in the economic pie toward capital and away from labor? “It’s easy for economists to say, ‘Look—this is what happens all the time. You get a technological innovation, people adjust and you get growth.’ But when ‘people adjust,’ it can be socially dislocating. The ‘adjustment’ that happens to dad will affect the son and daughter a generation later. These adjustment costs are substantial and long lasting. This gets mixed in with opioid abuse and other indicators of social problems. And, indeed, that does contribute to the political climate that we’re in.”

To address poor growth, policymakers cut taxes and increase government spending. But they usually do so when unemployment is high and economic conditions are weak. “This time around, we’ve put our foot on the gas at a time when unemployment is really low.” And even before the recent stimulus, debt levels were growing. Why does this matter? Historically, government spending on mandatory items, like Medicare and Medicaid, was proportionally low, while discretionary items, like defense spending, were a larger chunk of the budget. Today, the budget is increasingly dominated by required spending and interest expense on debt. “Everything gets a little bit harder if your federal budget is devoting more and more money just to paying off interest on previous borrowing.”

While the Fed is raising interest rates, those rates remain low in historical context. This leads to an important political question, according to Gayer: “Is our partisan environment preparing us for what inevitably will be a recession?” With very low interest rates, tax cuts already in place and government spending pushing debt ever higher, will we have tools available to deal with a recession when it happens? What happens if current policy solutions don’t ultimately address the weak productivity growth they hope to correct and instead simply spark inflation? While we hope that the economy and our policy toolkit evolve with the changing environment, as investors, we need to prepare for a future where we can’t take a robust economy for granted—all the more reason for us to remain devoted to fundamental investment research so we can parse the wheat from the chaff.