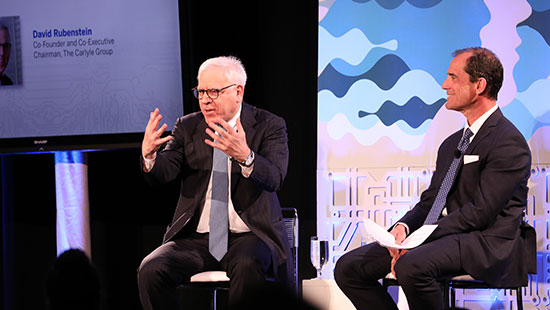 What do the Magna Carta, the Washington Monument and giant pandas have in common? Those who have followed David Rubenstein’s career know that he has supported all of these causes and many others through his exemplary philanthropic efforts. During the NOW 2018 conference, Rubenstein and Brown Advisory CEO Mike Hankin engaged in a rapid-fire conversation that covered Rubenstein’s thoughts on a wide range of topics, from the Founding Fathers to Facebook and Twitter.

Rubenstein is a co-founder and co-executive chairman of The Carlyle Group, one of the world’s largest private equity firms. Since he helped start Carlyle in 1987, it has grown into a firm managing $174 billion from 31 offices around the world.

History and patriotism—both resounding themes in Rubenstein’s life—permeated the discussion. He grew up in a modest household in Baltimore, Maryland, and at age six, he took the initial step toward unlocking a fountain of knowledge by attaining his first public library card. He has never looked back; today he aims to read at least 100 books every year, a feat that is especially impressive given the enormous amount of time he devotes to philanthropic work.

Rubenstein’s interest in “patriotic philanthropy” is guided by his early experiences in government service. In the 1970s and early 1980s, he served as chief counsel to the Senate Judiciary Committee’s Subcommittee on Constitutional Amendments, then as President Carter’s deputy assistant for domestic policy. He brings a passion and intellectual command of government, policy and history to his humanitarian endeavors, and wants others to learn from history so that we can all do better in the future. He cited a few painful reminders of the decline of historical knowledge in the U.S.: According to the Annenberg Public Policy Center, 75 percent of Americans can’t name the three branches of government, and more than 30 percent do not know their First Amendment rights.

Why did he purchase a copy of the Magna Carta to put on display? Why did he pledge millions to repair the Washington Monument? Rubenstein values history as a tangible, physical asset, and he feels that experiencing the real thing is more inspiring than simply viewing a memory on a computer screen.

Rubenstein spoke about the importance of giving back, with one’s time as well as money if possible. He was an early signatory of the Giving Pledge, a commitment from a growing number of extremely wealthy individuals to donate a majority of their wealth to charity. The Greek term philanthropia means “love of mankind,” and Rubenstein brings a level of passion and generosity to mankind that is unmatched by most. He said that being generous makes you feel good and in his opinion helps you to live longer. He said that he hopes there is a special place in heaven for people who give generously: “I can’t guarantee this, but why would you want to take a chance that I’m wrong?”

The brisk conversation sped through the decades to arrive at a discussion of our highly polarized society. He noted that our current polarization doesn’t compare to the stark divisions of the Civil War that eventually claimed 6 percent of the U.S. population. Nonetheless, our political leaders are increasingly gridlocked. What if we turned things over to young people? Rubenstein views young people as a creative force—most companies are started by people in their 20s and 30s, and rarely does one see a septuagenarian launch a startup.

With Washington falling short at times, Rubenstein noted that society is also placing more faith and confidence in business leaders to solve societal problems. Companies such as Facebook, Apple, Amazon and Google offer products, services and utility to the world, and despite bumps in the road, these firms are largely viewed as positive agents of change. Rubenstein sets a powerful example of someone focused on leading—speaking up, standing up for what is right and inspiring others to collectively raise the future.