For more than a century, automakers have provided a way to find adventure and new possibilities just beyond the horizon. Now the industry is also trying to satisfy consumers’ Web-focused wanderlust.

Global automakers—latecomers to the digital highway—are now trying to hog its fast lane. Industry behemoths ranging from Volkswagen to Toyota to General Motors are pouring money and talent into boosting auto connectivity: building self-driving cars, upgrading safety, investing in ridesharing services and creating “electronic horizon” navigation that peers ahead to report on myriad details, including weather, traffic congestion and the contours of the road.

“The car is and will remain the ultimate mobile device,” Herbert Diess, CEO of Volkswagen’s passenger vehicle unit, said in January at the annual Consumer Electronics Show. Autos will eventually become “the most important device on the Internet,” Diess predicted in Las Vegas while showcasing the BUDD-e, an electric van that responds to voice commands and links to a home’s appliances, lights, communications, heating, cooling and security systems.

By redefining the car, the Old Economy auto industry aims to ride consumer and investor enthusiasm for Web-based innovation and beat back forays into the sector by info-tech powerhouses such as Apple and Google. We expect the advance into digital will do little in the foreseeable future to overcome the industry’s toughest challenges, including overcapacity, tightening regulations and sputtering sales growth. So rather than invest in highly-cyclical automakers, we are buying shares in companies that provide the sector with the software and hardware for its digital initiatives.

The race to develop the connected car is speeding up:

The spread of digital technology is not the biggest immediate threat to automaker profitability. Slowing economic growth in emerging economies such as Brazil is slamming the brakes on growth in global sales. The whiplash from decelerating growth was especially harsh last year in China, the biggest market for new cars with more than 20 million in annual sales. U.S. auto sales this year may not exceed the record in 2015 of 17.5 million.

Also, regulatory costs will probably rise. Volkswagen in January started recalling nearly 11 million diesel-powered vehicles worldwide in one of the biggest product recalls in the automotive industry’s history following a disclosure that it rigged engines to cheat on emissions tests. The finding is prompting stiffer regulation in Europe and beyond. Volkswagen has made a provision of $7.5 billion globally for the recalls and faces billions of dollars in litigation and fines.

Although a threat to Old Guard automakers, the digitally equipped car is a boon to consumers. When fully deployed, autonomous cars could bring $5.6 trillion in worldwide annual savings from several benefits, including reduced fuel consumption, higher passenger productivity, and less accidents and traffic congestion, according to Morgan Stanley. In the U.S. alone, the savings could total $1.3 trillion. 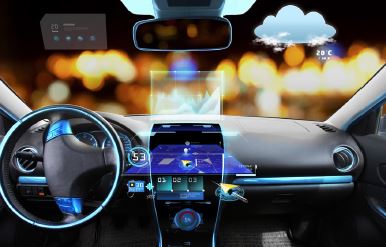 We are finding opportunities in companies that are profiting from the sector’s plunge into digital technology by developing the car’s central nervous system. For example, Google—whose parent company is Alphabet—began developing a driverless car last decade based partly on its advances in Google maps and artificial intelligence. Its cars have logged more than 1 million miles on U.S. roads. In February, the National Highway Traffic Safety Administration issued a letter backing the company’s view that an autonomous car is as safe as a human-controlled vehicle. We believe that Alphabet’s stock does not yet reflect the value of its driverless car initiative. Improvements in financial disclosure prompting transparency on such “moonshot” projects could boost company shares as investors recognize the potential of game-changing markets like autonomous vehicles.

TE Connectivity, the top supplier of auto connectors with a 40% market share, is gaining from increased demand for auto safety and fuel efficiency. Its products are at the core of several features, including airbags, anti-lock brakes, parking-assist cameras, collision alarms, lane-departure warnings, stability control and head-up displays. TE last year bought Measurement Specialties, a manufacturer of sensors, doubling its potential market opportunity to about $400 per car. Amphenol, which also focuses on electronic sensors and connectors, derives 20% of its sales from the auto industry, with annual growth from the sector at close to 10%. The company is known for shareholder-friendly use of capital.

Since it first rolled off an assembly line, the automobile has been a cherished apparatus for escape. Today, we are investing in companies that help ensure drivers can go where they want in their car while remaining right at home on the Web.

Other articles in this issue:

Through the Storm
Stock market volatility has spiked in response to immediate market concerns about energy prices, weakening economic growth in China and changes to monetary policy, as well as momentous capital-market shifts during the past 20 years. In times like these, investors earn their stripes by staying focused on their long-term goals.
By Paul Chew, CFA, Head of Investments

A Lift Amid Headwinds: The Appeal of Mortgage Bonds
With the Federal Reserve tightening for the first time since 2006, investors may generate competitive returns from the comparatively stable market for mortgage-backed securities.
By Tom Graff, CFA, Head of Fixed Income and John Henry Iucker, Fixed Income Research Analyst

Present at the Creation: Early-Stage Venture Capital
While headlines often focus on Uber, Airbnb and other private companies valued at more than $1 billion, we are looking beyond the so-called unicorns to find opportunities for bigger returns in early-stage venture capital.
By Jacob Hodes, Co-Head of Private Equity and Keith Stone, Private Equity Venture Analyst

The views expressed are those of the authors and Brown Advisory as of the date referenced and are subject to change at any time based on market or other conditions. These views are not intended to be a forecast of future events or a guarantee of future results. Past performance is not a guarantee of future performance. In addition, these views may not be relied upon as investment advice. The information provided in this material should not be considered a recommendation to buy or sell any of the securities mentioned. It should not be assumed that investments in such securities have been or will be profitable. To the extent specific securities are mentioned, they have been selected by the author on an objective basis to illustrate views expressed in the commentary and do not represent all of the securities purchased, sold or recommended for advisory clients or other clients. The information contained herein has been prepared from sources believed reliable but is not guaranteed by us as to its timeliness or accuracy, and is not a complete summary or statement of all available data. This piece is intended solely for our clients and prospective clients and is for informational purposes only. No responsibility can be taken for any loss arising from action taken or refrained from on the basis of this publication.

This communication and any accompanying documents are confidential and privileged. They are intended for the sole use of the addressee. Any accounting, business or tax advice contained in this communication, including attachments and enclosures, is not intended as a thorough, in-depth analysis of specific issues, nor a substitute for a formal opinion, nor is it sufficient to avoid tax-related penalties.