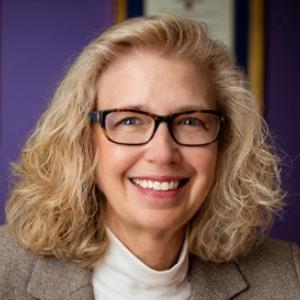 The Honorable Christine H. Fox is a Senior Fellow at the Johns Hopkins University Applied Physics Laboratory. Prior to her appointment as a Senior Fellow, Ms. Fox served as the Assistant Director for Policy and Analysis at JHU/APL from May, 2014 until Jan, 2022. As the nation’s largest University Affiliated Research Center, APL performs research and development on behalf of the Department of Defense, the intelligence community, the National Aeronautics and Space Administration, and other federal agencies. The Laboratory has more than 8,000 staff members who are making critical contributions to a wide variety of nationally and globally significant technical and scientific challenges.

Previously, she served as Acting Deputy Secretary of Defense between December 2013 and May 2014 and, prior to that, Ms. Fox served as the Director, Cost Assessment and Program Evaluation from 2009 to 2013. In that position, she was the principal civilian advisor to the Secretary of Defense for analyzing and evaluating plans, programs, and budgets in relation to U.S. defense objectives and resource constraints.

Prior to her government service, Ms. Fox served as the President of the Center for Naval Analyses (CNA), a Federally Funded Research and Development Center and as the scientific analyst to the Chief of Naval Operations. During her 28-year career at CNA, Ms. Fox oversaw analysis of real-world operations, from the first Gulf War and the operations in Bosnia and Kosovo in the 1990s, to the operations in Afghanistan immediately following the September 11th attacks, and the operation in Iraq in early 2003.

From 2003-2005, Ms. Fox served as a member of NASA’s Return to Flight Task Group, chartered by the NASA Administrator to certify the recommendations made by the Columbia Accident Investigation Board. Currently, Ms. Fox serves on the governing committee for the Division on Engineering and Physical Sciences for the National Academy of Sciences, Engineering and Medicine. She also serves on the oversight board for the U.S. Naval Institute and is a life member of the Council on Foreign Relations.

Ms. Fox earned a Bachelor of Science degree in mathematics and a Master of Science degree in applied mathematics from George Mason University. She is a three-time recipient of the Department of Defense Distinguished Service Medal. She has also been awarded the Department of the Army’s Decoration for Distinguished Civilian Service.