These days, it seems like all eyes are on the Federal Reserve. Well, maybe not all eyes, but certainly a large number of investors are paying unusually close attention to the Fed as it begins to unwind its bond investments and thus reduce the size of its balance sheet. While this shift in monetary policy may ultimately have important implications for asset allocation and other investment decisions, we’re not convinced that its near-term impact will be particularly significant.

Meanwhile, we continue to focus on security selection. With so many resources devoted to interpreting the Fed’s every move, it’s virtually impossible to create a meaningful performance advantage based on superior macroeconomic information—i.e., the broad markets are largely efficient. A better strategy, we think, is to exploit inefficiencies at the individual bond level through solid fundamental research. As we will argue below, the research process must be consistently applied and repeatable in order to counteract the natural human tendency to treat each situation as unique and thus arrive at conclusions that may contradict one another.

By way of background, the Fed’s balance sheet has roughly quintupled since the financial crisis of 2008. Interestingly, for many years prior to the crisis, the portfolio changed very little in value or in the composition of its holdings, which include Treasury securities, mortgage backed securities and other types of loans. Monetary policy was implemented largely through a combination of the discount rate (the interest rate that banks and other depository institutions pay for loans from regional Federal Reserve lending facilities), reserve requirements (the funds that an institution must hold against certain deposit liabilities), and open market purchases or sales of Treasury and other federal agency securities designed to sustain short-term interest rates at targeted levels. Starting with the bankruptcy of Lehman Brothers, the depth and breadth of the crisis called for considerably larger-scale measures to restore liquidity and stability to the financial system, and—once the discount rate was lowered and reserve requirements relaxed—massive bond purchases quickly became the tool of choice. As shown in Exhibit 1 below, the Fed’s balance sheet more than doubled in a matter of months. 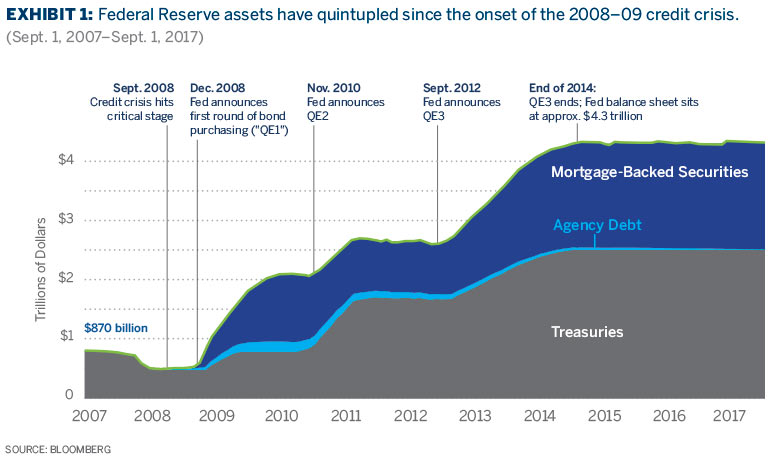 As short-term interest rates on low-risk assets approached zero during the crisis, conventional monetary policy became ineffective at encouraging investment and stimulating the economy. The Fed turned to a series of three rounds of quantitative easing (QE), aimed at raising the price of longer-dated financial assets (i.e., lowering their yield) to incent investors to funnel money into riskier assets, thereby stimulating the economy while at the same time expanding the money supply. By 2014, when QE officially ended, assets on the Fed’s balance sheet totaled $4.3 trillion, compared to $870 billion just six years earlier.

Once the need for QE ended, the Fed shifted its strategy. Rather than adding to its balance sheet, it decided to maintain the level of bond holdings by reinvesting the proceeds of maturing bonds into new bonds. On balance, this approach was still stimulative, and, as we’ve seen, financial asset prices have continued to climb and the economy has grown.

The main reason that investors are so focused on the Fed now is that on Sept. 20, the Fed announced that it would reverse course and begin the process of unwinding (or “undoing”) its enormous balance sheet. Along with President Trump’s recent nomination of Jerome Powell as the next Fed chairman, the announcement has left some people wondering if the benign and relatively predictable environment to which they’ve become accustomed is about to change—and not for the better.

Our fixed income team has been skeptical of the impact that this change in policy will have on the bond markets, at least in the short to intermediate term.

The effect on fixed income markets thus far has been muted, and it was largely felt last spring when the internal debate over policy was first made public. The Fed’s economists seem to believe that the effect of QE in recent years has been to hold the interest rate on 10-year Treasury bonds (now about 2.3%) about a percentage point below where it otherwise would have been. If they are correct, rates would presumably rise by that amount as QE is undone, but the adjustment could take a number of years. One could argue, as Warren Buffett recently did, that a percentage point increase in rates would not exert a significant effect on stock valuations because even at 3–3.5%, the 10-year rate would still be low by historical standards.

A number of thoughts are swirling in the wake of these policy and leadership shifts. Will the new Fed chair change the plan? Will the pace of bond sales accelerate? How fast will the balance sheet return to normal? And what is “normal” anyway, given changes in how the Fed operates today and the size of the balance sheet that is needed to effectuate monetary policy?

These and other similar questions are being asked by thousands of investors, and their views are reflected in interest rates generally, and in the prices and yields of individual bonds specifically. With so many eyes and ears absorbing and interpreting every tiny bit of information and nuance on the subject, it’s virtually impossible to formulate a unique, differentiable view based on the flow of information. The markets, in short, are “efficient.”

If an information edge is elusive, how else can one seek to achieve superior investment performance? Our fixed income team believes that the answer lies in the consistent application of certain disciplines in the process of making decisions, or judgments, about risk and potential return. In short, they emphasize the importance of having a well-defined philosophy and sticking to it. Rather than relying primarily on superior information, they focus on interpreting and applying the information available in a thoughtful and consistent manner.

Because Fed policy and the direction of interest rates are so closely scrutinized, the team doesn’t tend to make big bets on such “macro” factors by deviating greatly from industry benchmarks in terms of the maturity and duration of client portfolios in the aggregate. On individual securities, however, they do adopt positions that differ from the consensus. Their conclusions are based on an analysis of each security’s underlying fundamentals, with a particular focus on the risk of default. The team’s ability to perform well rests primarily on this process.

A good illustration of how leading experts can arrive at different conclusions based on the same data is offered by Michael Lewis, author of Liar’s Poker, The Big Short and a number of other best-selling books. In his most recent book, The Undoing Project, he traces the work of two leading psychologists who have broken new ground in understanding human behavior and, specifically, how humans make decisions. Lewis cites a study by the Oregon Research Institute, in which a group of radiologists was asked how they decide, based on an X-ray, if a person has stomach cancer. The doctors cited seven key signs of cancer, such as the size of an ulcer, its shape, etc., and said that their analysis of each case involves subtle and complex thought processes.

To test the doctors' hypothesis, the research team created a simple algorithm that equally weighted each of the seven factors to determine if an ulcer was malignant. They then asked the doctors to examine 96 X-rays and rate the probability of cancer in each on a scale of one to seven. Interestingly, the doctors’ diagnoses varied tremendously, with no apparent consensus on any particular X-ray. In an interesting twist, without telling the radiologists, the researchers had included duplicates of each slide in the sample, so that the doctors unknowingly examined each X-ray twice. Amazingly, all of the doctors contradicted themselves on at least one set of duplicate X-rays. The potential for human error was crystal clear in this experiment.

In a further development, it turned out that the simple algorithm (weighting the seven factors equally) was just as good of a predictor of cancer as the doctors’ subjective diagnoses. In effect, the radiologists might believe that their analyses required considerable thought and judgment, but the consistent application of objective standards did just as good a job.

The lesson is this: Not only is it important to focus on the factors that can make a difference in judging the merits of a particular security, but the interpretation of the information must be objective and consistent across the range of securities. In the medical case study, the algorithm (based on human judgment and experience) was more reliable than humans acting individually. After all, any person’s behavior can be influenced by all sorts of things, like how they are feeling physically, their emotional state, etc. In our experience, too many bond analysts (and, for that matter, equity analysts) fail the test of consistency, instead approaching each situation as if it is unique. Lewis’ book contains a number of examples in which people behave differently from one another when confronted with similar sets of facts and even go so far as to adjust their view of the facts to fit their conclusion.

None of this is to say that our research process is based on a recent reading of The Undoing Project. In fact, we’ve been refining our process for many years. The book does, however, highlight the importance of identifying a few key factors and making sure that the interpretation of them is consistent. Our discipline involves two primary elements:

We also believe that it’s important to stay within the discipline of a particular portfolio strategy, such as intermediate duration, “core,” certain quality standards and so forth. Some bond (and stock) portfolio managers may stray from their strategy in the pursuit of what they see as an opportunity to capture extra return, but the result can be counterproductive.

There’s always a temptation to focus resources on the big picture and try to outguess the consensus with regard to the Fed’s next move on interest rates or the effect of unwinding its bloated balance sheet. While we certainly pay attention to such factors, it’s exceedingly difficult to gain an edge in these respects. Instead, the bulk of our energies are devoted to individual security analysis based on underlying fundamentals and interpreting the results with discipline and consistency.

The views expressed are those of the author and Brown Advisory as of the date referenced and are subject to change at any time based on market or other conditions. These views are not intended to be and should not be relied upon as investment advice and are not intended to be a forecast of future events or a guarantee of future results. Past performance is not a guarantee of future performance and you may not get back the amount invested. The information provided in this material is not intended to be and should not be considered to be a recommendation or suggestion to engage in or refrain from a particular course of action or to make or hold a particular investment or pursue a particular investment strategy, including whether or not to buy, sell, or hold any of the securities mentioned. It should not be assumed that investments in such securities have been or will be profitable. To the extent specific securities are mentioned, they have been selected by the author on an objective basis to illustrate views expressed in the commentary and do not represent all of the securities purchased, sold or recommended for advisory clients. The information contained herein has been prepared from sources believed reliable but is not guaranteed by us as to its timeliness or accuracy, and is not a complete summary or statement of all available data. This piece is intended solely for our clients and prospective clients, is for informational purposes only, and is not individually tailored for or directed to any particular client or prospective client.