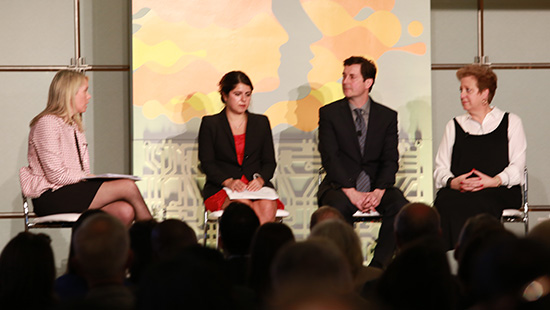 The world currently faces one of the most tragic humanitarian crises in modern history. According to the United Nations, more than 65 million people are currently forcibly displaced from their homes, a larger number than at any time since World War II. Today’s refugees are displaced on average for nearly 20 years, longer than at any other time in recorded history. Children born in conflict zones are particularly vulnerable; displaced children living in camps—described as the “lost generation”—have limited access to education and basic resources, and are essentially robbed of their childhoods.

A passionate and dedicated panel discussed a range of critical challenges facing refugee communities across the world. Adina Appelbaum spoke about the crisis in North and Central America, and the legal challenges for refugees seeking to represent themselves in the U.S. Sasha Chanoff focused on the issue from an international perspective, recounting his experience in a U.S. rescue operation into the Congo to evacuate massacre survivors. Caryl Stern shared stories from her work with children across the world with UNICEF.

Refugees face three options after being displaced. They can return home, they can integrate into the country to which they fled or they can relocate to a country with a program that allows them to resettle. In most cases, these are options in theory only, and refugees have no real choices available to them. Returning home is often unimaginable due to ongoing violence or threat of genocide. Integrating into a destination country has legal challenges with no defined pathway to citizenship. And resettlement programs have limited spots and long waiting periods. The crisis is exacerbated by the fact that refugees are often stripped of their options and prohibited from living outside of the temporary camps where they first settled. Many camps are “temporary” in name only—an estimated $25 billion a year is now needed for the food, water and other costs associated with refugee camps that were initially set up for emergency service but are becoming more and more permanent.

The rising tide of nationalism makes integration or resettlement more difficult. Refugees are wrongly stigmatized and painted as existential threats to national security and identity. Countries taking in most of the world’s refugees are often ill-equipped to address their needs, but wealthier countries have not stepped up to help. Many people view refugees through a zero-sum lens—what a refugee receives, a citizen must sacrifice—and on that basis fight vigorously to prevent refugees from resettling.

Refugees also struggle with legal representation. In the U.S., for example, refugees can legally seek asylum but are immediately detained by Immigration Customs Enforcement and have no legal avenue to seek release from custody. Migrants escaping violence in their home countries—including children separated from their families—are often detained in the U.S. for the entirety of their case. Refugees are not guaranteed the same legal rights in immigration courts as they would be in other U.S. courts, and refugees often represent themselves without understanding the law, their current status or even the language used in the court proceeding.

The panelists stressed that despite the problem seeming overwhelming at times, action on a local and personal scale can have monumental impacts in helping the plight of refugees. Donations help fund programs, organizations and humanitarian missions that save lives; making your voice heard with politicians reminds them that the issue is a top concern of constituents; volunteering in any professional capacity helps underfunded NGOs accomplish their mission. Finally, conversations with family, friends and colleagues about the dangers of xenophobia can help stop fear from descending into race-based hatred. When refugees integrate or resettle, they generally become positive, active citizens in their communities and contribute more to social welfare than what they extract.