Three companies have brought down to earth the long-elusive goal of selling corporate customers computing power through the Internet.

For years, cloud computing’s promise of unmatched efficiency, unprecedented scale and rising revenues proved out of reach for business. Not anymore—three companies are pinning down the cloud in enterprise computing.

Amazon.com, Microsoft and Google have each staked out a competitive advantage in the booming, $70-billion business of selling computing power and data storage via the Internet.

These companies are leading a “violent” shift to cloud computing that, by the end of this year, will probably account for one-third of the world’s $300 billion annual spending on software, according to Harry Weller, a general partner at NEA, a leading venture capital firm. Amazon, Microsoft and Google so dominate the market that, if current trends hold, they may handle nearly all of worldwide computing in 10 years, Weller predicted at Brown Advisory’s Navigating Our World (NOW) conference in April. “Three or four computers in the world,” he said, allowing for the emergence of a fourth cloud giant. “That’s where we’re headed.”

The companies have gained a first-mover advantage by hiring legions of top software and engineering talent, committing billions of dollars to servers and other Internet-focused capital investment, and demonstrating that cloud computing can be reliable and secure. For the foreseeable future, they have clinched the position as the main engines for computing and managing the world’s rising flood of data.

To many firms, the savings and efficiency from cloud computing are irresistible. Companies can immediately ramp up or reduce computing power based on their needs while shutting down costly in-house data centers. They can also be confident of always using the newest version of software. Amazon’s cloud division, Amazon Web Services (AWS), says that it can slash many customers’ information technology expenses during a three-year period by about 60%.

General Electric Co. said in October it plans to close most of its data centers and shift all but its most sensitive data to AWS and other cloud providers. Netflix in January announced that it had completed the move of all of its streaming to AWS. Promising similar savings, Microsoft has announced it is providing cloud services to 3M and Boeing, while Google has said it is working with Coca- Cola and Best Buy.

AWS, Microsoft and Google (whose parent company is Alphabet) have benefited as virtually every firm seeks to meet consumer expectations for a digital experience. Even traditional businesses, in industries such as insurance and banking, have, in a sense, become software companies. Growth in the “Internet of Things” is also fueling demand for more efficient computing and data storage. Businesses and consumers are connecting myriad objects on the Internet for real-time monitoring and measuring—from light bulbs, heating systems, baby monitors, factory machinery and dishwashers to office equipment, bulldozers, vending machines and jet engines.

By 2020, the number of connected things will increase to 21 billion from 4.9 billion in 2015, according to Gartner.* Advances in artificial intelligence and machine learning software will further boost the volume and complexity of digital information. Companies will need help in processing and storing the surge of Big Data and, by 2019, their worldwide spending on cloud computing will more than double to $141 billion, according to International Data Corp.**

For decades, the concept of cloud computing dazzled info-tech executives, sometimes at huge cost. Following the burst of the dot-com bubble in 2000, Sun Microsystems faltered after making a premature bet on data processing and storage via the Internet. Oracle bought Sun in 2010.

Since then, technological gains have dramatically cut costs and boosted both connectivity and computing power. Storing and crunching data via the Internet is much easier, cheaper and faster than just five years ago.

These companies are leading a “violent” shift to cloud computing that, by the end of this year, will probably account for one-third of the world’s $300 billion annual spending on software.

To be sure, regulation and concern about privacy have slowed adoption of cloud computing. Many companies have held back from the cloud because of worries about cybersecurity, loss of control over data or the risk of dependence on a single cloud provider. AWS, Microsoft and Google seek to overcome such hesitation and gain market share by leveraging their core strengths:

All three companies have benefited as software developers— seeking greater speed and efficiency—”rent” the companies’ cloud computing power while adopting their open-source code, according to Weller. Often, developers act without explicit approval from their chief information officer. Consequently, when it comes to the decision over whether to embrace the cloud, traditional corporate gatekeepers for deployment of new technology are losing clout, he said.

“There’s nothing more powerful than when you have a combination of technology change and decision-maker change at the same time,” Weller said. “Because there is no gatekeeper—the gatekeeper is gone.” 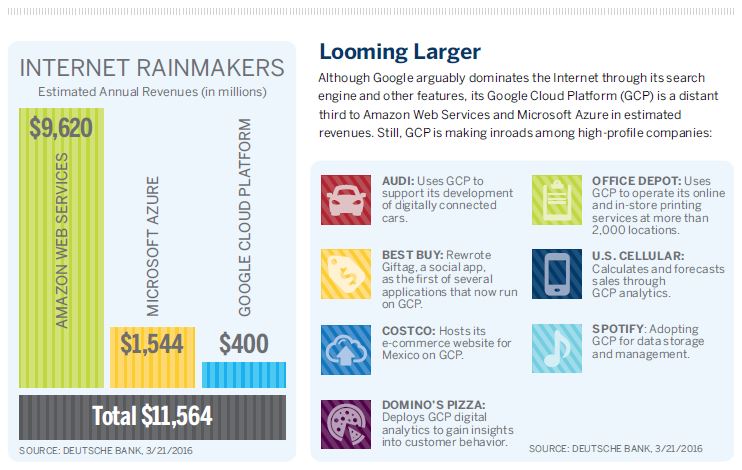 This communication and any accompanying documents are confidential and privileged. They are intended for the sole use of the addressee. Any accounting, business or tax advice contained in this communication, including attachments and enclosures, is not intended as a thorough, indepthanalysis of specific issues, nor a substitute for a formal opinion, nor is it sufficient to avoid tax-related penalties.