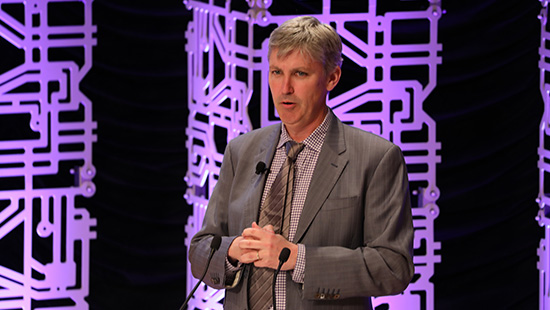 Despite the countless benefits of the internet, it suffers from a glaring gap in its fundamental design. To hear popular science author Steven Johnson describe it, this fundamental flaw is that the internet lacks an open-source feature to map each user’s identity. This functionality, or lack thereof, can be viewed as the primary driver behind dominant internet business models that track users’ identities and behaviors, and sell that information to advertisers. But as Johnson discussed in his presentation at NOW, the advent of blockchain technology—the internet buzzword of 2017 and the core engine of cryptocurrencies like Bitcoin—is poised to disrupt the traditional architecture of the internet. And like the internet revolution that came before it, blockchain may just change everything.

The discussion of identity and anonymity online tends to produce a strong gut reaction for most of us. It is too easy to envision an Orwellian nightmare where dystopian autocracies track the public’s every digital move. But what if the internet’s lack of functionality to track identity was filled by something other than advertising companies that persuade users to cough up their personal data, then sell that data to the highest bidder?

Tim Berners-Lee, the oft-credited father of the internet, is pushing for exactly that. He is drawing from his experience at CERN in the 1980s, where he shepherded the open-source creation of the internet’s core protocols. An international cohort of academics share his vision, and they hope to develop an open-source solution to track digital identity. But Johnson believes that any open-source identity solutions will be impossible to get off the ground.

Johnson’s reasoning: He refers to the environment that spawned the internet as “Internet One,” and describes it as an early and relatively utopian environment that was absent any geopolitical or corporate interests. It was simply a group of academics who understood the need for universal standards and protocols to make the nascent internet work. Those early developers were free to collaborate and build their optimal design for the internet, without needing to contend with commercial forces.

Today’s “Internet Two” environment is completely different: Corporate behemoths are now motivated by profit to develop closed protocols and compete for their share of captive web traffic, leaving little room for open-source academic consortiums to gain any traction. In addition to the corporate influence over the internet, we now live in a world where nations themselves compete in various ways online—try to imagine internet regulators from Washington to Brussels to Beijing agreeing on a common framework for addressing digital privacy, and you begin to see why Johnson and others doubt that any open-source proposal can succeed.

Enter blockchain technology, which Johnson refers to as “digitized trust.” Blockchain circumvents the traditional need for a centralized database like Facebook or Google to ensure that identity, information and transactions are accurate. Instead, a replicated and encrypted database, or “ledger,” is distributed to and shared by all users. Blockchain technology simultaneously allows any user to edit the ledger to record valid transactions, and because the latest verified version of the ledger is constantly replicated and shared among participants, in theory no one can erroneously or maliciously tamper with it.

Blockchain is still in its infancy, and we can’t yet predict the direction this technology will take—new paradigm for digital communication, passing fad or somewhere in between. But Johnson views it as a path to taking back our privacy.