As investors continue to seek yield opportunities while facing historically low interest rates, municipals have been a beneficiary of inflows and seen a proliferation of issuers. In many instances, however, this backdrop of increased issuance has belied decreased transparency–particularly in general obligation (GO) issues. Investors have traditionally flocked to bonds with the GO pledge for their perceived status as safer investments; however, Brown Advisory’s approach and analysis has generally found certain revenue bonds to be more transparent, more easily modeled, and more compelling in portfolios.

This approach does not suggest that GO bonds have no role in a portfolio; there is no debate on their propriety and diversification capabilities. The debate lies in certain issuers’ lack of transparency, the market’s reliance on the accuracy and timeliness of the ratings agencies’ assessments, and the legacy expenses of municipalities, which can adversely impact future solvency and repayment. This confluence of factors, combined with a market that tends to become fragmented in times of stress, means that when problems happen, they can be sharp and sudden. For example, just before Detroit’s much-publicized 2013 bankruptcy, their GO debt was rated comparably to that of the Detroit Water and Sewerage Department. When the city entered into bankruptcy, GO debtholders suffered heavy losses, whereas holders of the water bonds continued to receive income. Though GO debt was backed by the full faith and credit of the issuing entity, which had the right to levy taxes, one of the Emergency Manager’s arguments in the bankruptcy proceedings was that the populace can only endure tax increases to a certain point. Even outside of the extreme circumstances of Detroit, for municipalities, different administrations and their priorities can influence the perceived willingness and ability to repay bonds.

Owning a portfolio with a greater weight in revenue backed bonds versus GO bonds does not necessarily mean elevated credit risk. Increased visibility into the fundamentals of a bond allows us to justify the credit risk we take. We believe revenue bonds can offer better visibility as many are subjected to a high level of scrutiny as either public or corporate operating entities. In the wake of the financial crisis, the investment management community, the SEC, and investors alike have pushed for greater access to management and the underlying financials of revenue bond issuers.

At Brown Advisory, we often view the credit risk of revenue-backed issues more preferably than that of a GO, even one with comparable ratings. The core of our risk management approach is a credit research process that gives us the comfort to buy a concentrated portfolio of high-conviction names.

A case study in how this process and the nuances associated with municipals leads to a higher conviction in revenue-backed bonds lies in our assessment of GO bonds from Dallas, Texas. By the most recent census figures, Dallas is the second-fastest growing metropolitan region in the United States and surpasses the next closest in growth (Atlanta, Georgia) by over 50% in terms of population. According to the Dallas Morning News, nearly 10% of all apartments currently being built in the United States are in the Dallas/Fort Worth area1. Yet, despite this rapid growth and ostensibly favorable demographics, legacy pension costs, the overhang from government liabilities, and unfavorable accelerations of redemptions have substantially diminished the Dallas Police and Fire Pension System’s–the city’s largest pension plan–funding level. [Note: On December 5, 2016 the mayor filed a lawsuit (in his capacity as a private citizen) in order to stop the withdrawals]. The critically unfunded levels of this pension and the subsequent request for a $1.1bn injection of capital into the system shows that even the most outwardly fiscally sound municipalities can have substantial baggage they are carrying.  As of January 12, 2017, Dallas GO bonds carried AA ratings from Fitch and S&P, as well as A1 from Moody’s–all were at negative watch, whereas the bonds traded at 69bps above Aaa–a tight spread considering the uncertainty surrounding the issues and the risk of downgrade.

To further complicate matters, Texas issues more debt than all but two other states and is one of 12 which expressly allow municipal bankruptcies. We are not suggesting a Dallas bankruptcy is imminent; rather, we use this example as a cautionary tale of the fiscal woes which can impact the value of general obligation debt holdings.

Contrast the Dallas GO situation with revenue bonds from the Dallas/Fort Worth International Airport (DFW). For calendar year 2015, DFW was in the top 10 of the world’s busiest airports trailing only Atlanta Hartsfield, Chicago O’Hare, and Los Angeles International as U.S. representatives on the list2. During the same period, DFW served over 65 million passengers–a 2.6% year-over-year increase3. Though susceptible to factor risk from overall economic health and the variability of travelers it serves, DFWissued debt was rated A+ by S&P, A by Fitch, and A1 by Moody’s and traded at 130 bps above Aaa as of December 31, 20164. While the City of Dallas may have authority to tax and increase sources of revenue from its residents and businesses, the DFW Airport is not susceptible to people fleeing to the suburbs of Plano, Frisco, or McKinney to avoid taxation. DFW debt is secured by a revenue pledge which is binding and offers a legal claim to revenues. This is an example of the decision to incur a modest step down in the ratings agencies’ scale for the potential for better fundamentals, potentially higher yield, and the opportunity for price appreciation should the underlying credit of the issuer improve. 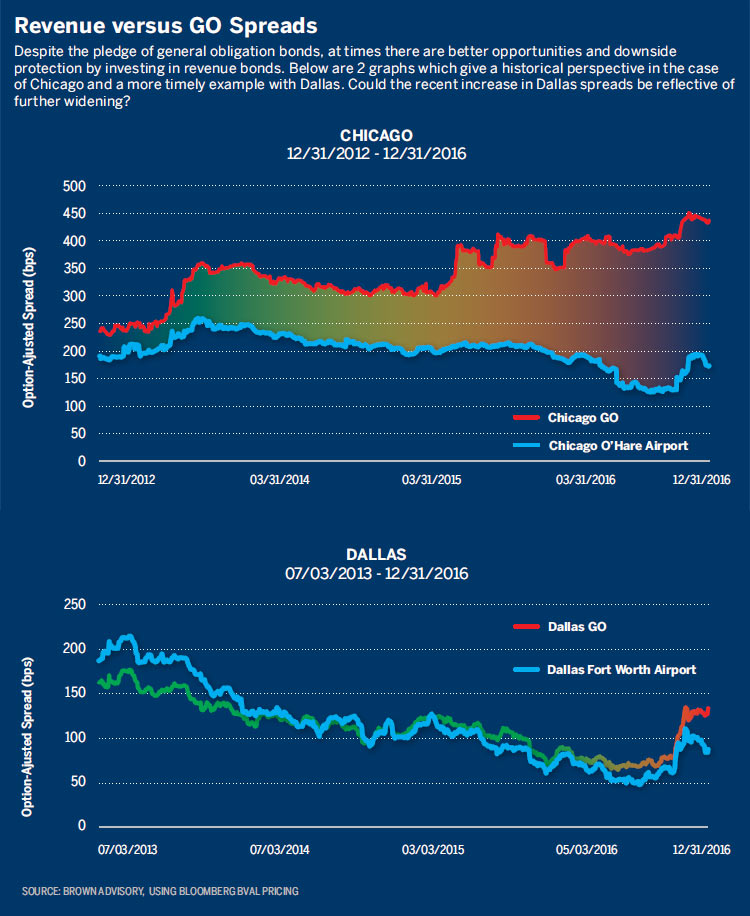 In the past, it was commonplace for advisors to buy specific bonds, or to ladder a series of bonds, based on rating and hold to maturity as a safe investment. This approach typically created client outcomes of heavy weightings toward GO debt, and with the prevalence of bond insurance, very little perceived risk of default. However, the market learned with the downgrades of the insurers, that when depending solely on the underlying fundamentals, not all GO debt is created equal. Some, such as bondholders in Detroit, Puerto Rico, and San Bernardino, California, experienced even worse outcomes with bonds that ended up defaulting or in bankruptcy.

Perhaps in reaction to disappointing outcomes or perhaps as a result of the increasing complexity and issuance in the municipal market, we have seen a marked shift in the consumer landscape of municipal bonds. Direct retail muni ownership has dropped from just over 50% in the first quarter of 2011 to just over 30% in by the end of 2015, while balances held in separately managed accounts more than doubled in the meantime5. “We’ve seen a growing interest from our key distribution partners to migrate away from individual bond selection and into professionally managed products in which clients get immediate diversification and scale,” said Brown Advisory Key Account Manager John Davis. “We feel the most important questions clients and advisors can ask about their municipal allocations are: Is your manager looking at the underlying risk in your issues? And are you being compensated for this risk?”

Private investments mentioned in this article may only be available for qualified purchasers and/or accredited investors.

The views expressed are those of the author and Brown Advisory as of the date referenced and are subject to change at any time based on market or other conditions. These views are not intended to be and should not be relied upon as investment advice and are not intended to be a forecast of future events or a guarantee of future results. Past performance is not a guarantee of future performance and you may not get back the amount invested. The information provided in this material is not intended to be and should not be considered to be a recommendation or suggestion to engage in or refrain from a particular course of action or to make or hold a particular investment or pursue a particular investment strategy, including whether or not to buy, sell, or hold any of the securities mentioned. It should not be assumed that investments in such securities have been or will be profitable. To the extent specific securities are mentioned, they have been selected by the author on an objective basis to illustrate views expressed in the commentary and do not represent all of the securities purchased, sold or recommended for advisory clients. The information contained herein has been prepared from sources believed reliable but is not guaranteed by us as to its timeliness or accuracy, and is not a complete summary or statement of all available data. This piece is intended solely for our clients and prospective clients, is for informational purposes only, and is not individually tailored for or directed to any particular client or prospective client.