Chief Investment Officer Paul Chew reflects on his experiences during past market disruptions, and how those lessons inform his thinking today.

Last month, I was co-hosting one of our firm’s daily Morning Meetings with Jacob Hodes, our firm’s head of private equity. We covered a lot of ground in a freewheeling conversation, but one question he asked me really got my attention: “What are the most important lessons you learned from managing through the technology bubble in 2000-01 and the financial crisis of 2008-09?”

I’ve been asked that question before, as have many of my colleagues, but at that moment—speaking in front of the entire firm—I was taken aback at just how few of our 600-plus colleagues were serving clients or working as investment professionals during those crises. I know I didn’t answer as thoughtfully as I would have liked at the time, and my mind has circled back to the question each time I read another article commemorating the 10-year anniversary of the financial crisis and the shockwaves it produced across the world.

During those earlier periods in my career I benefited greatly from the wisdom and guidance of senior leaders at the firm—Ben Griswold, Truman Semans, Mike Hankin and Terry Beaty are a few that come to mind—who had all invested and advised clients through tough periods, from the “dead decade” of the 1970s to Black Monday in 1987. Their counsel was invaluable to me both personally and professionally (and still is today), and with that in mind I wanted to try and pass along a few lessons I’ve learned to my younger colleagues at Brown Advisory, whose first major market disruption is still ahead of them.

Early in my Brown Advisory career, I was fortunate to be an equity research analyst covering technology during the expansion of the tech bubble in the late 1990s, and the subsequent collapse of that bubble. I didn’t feel “fortunate” to be there for the collapse at the time, but it gave me an extremely valuable perspective on downturns that has helped me immeasurably ever since.

This seemed like an easy job at first. Every stock I recommended was a home run. And it’s important to remember that there was a real foundation for the growth of the sector at the time. Two powerful transitions were in progress. The first was the broad rollout of cellphone technology, which let average citizens communicate without being tied to a landline. (Some of you may recall that people used to have actual telephones in their houses!) The second was the Internet, which brought a universe of information to our fingertips and fundamentally changed how businesses interacted with each other and their customers.

But as often happens in investing (and life), people’s optimism raced ahead at what turned out to be an unjustified pace. Stocks were going up and everyone wanted to be involved. I would get in a taxi on a research trip, and the driver would talk to me about all of the money she was making day-trading tech companies. Alan Greenspan spoke of "irrational exuberance" in markets in 1996, and his remark would turn out to be prescient (albeit three years early). Those who were irrationally exuberant, and who took on too much risk during this period, were badly hurt when the bubble burst.

I benefited from working with Rick Bernstein, my boss and mentor at the time and a diehard value investor. He continually insisted that we focus not just on the upside potential of tech companies, but on the downside risk to these stocks if something went wrong. We began to sell some of the stocks that we had owned successfully for several years; we sold out of Cisco, for example, in the summer of 1999 after a quarterly earnings report announcing 65% year-over-year revenue growth. Our earnings model for Cisco showed that the market was pricing in a growth rate for the company that would make it bigger than the entire industry that it served. Our decision to sell seemed entirely logical—yet the stock doubled in the next six months after we exited the position.

Anatomy of a Dot-Com Sell Call

In the summer of 1999, I made the recommendation to sell Cisco Systems after it became clear that the growth it needed to produce to justify its price was unsustainable. It was ultimately the right long-term decision. But because we exercised caution early, it felt very wrong in the moment—the stock doubled within six months, and didn’t capitulate until the following autumn. 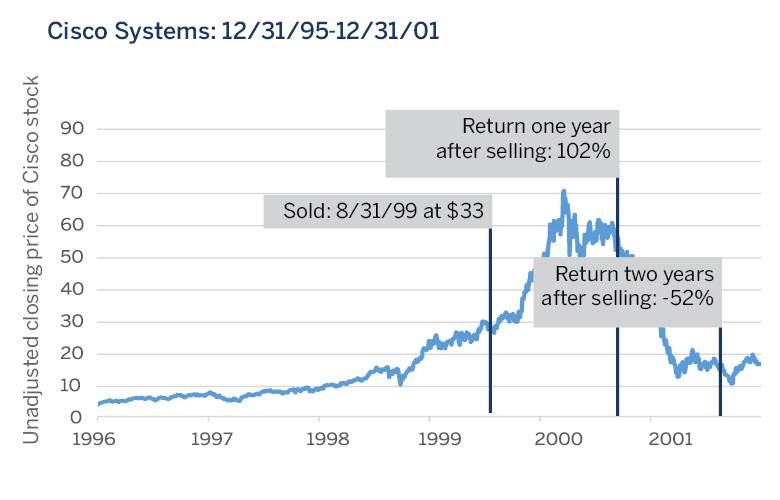 I was new to the company at the time, and wondered if I was going to make it if I continued to make “bad” calls like with Cisco. I will never forget a client coming up to me at an event, saying that he “wanted to meet the world’s dumbest investor.” But Brown Advisory was patient with me and long-term oriented with its investment mindset; the market ultimately corrected and I lived to fight another day with my colleagues.

There are two memories burned into my consciousness from the 2008-09 financial crisis.

The first took place on September 13th, a surreal Saturday two days before the venerable Lehman Brothers, a bedrock institution on Wall Street for more than 150 years, officially filed for bankruptcy. My phone started blowing up with calls and emails from friends in the business, all of whom were in some stage of shock or denial, and many calling to say that they had lost their jobs at Lehman or other firms overnight. Friends that I had long thought of as incredibly successful career investors were now unemployed. Over the years, most recountings of the financial crisis tend to focus on its causes and often blame Wall Street’s greed for its near-collapse; while this may be a fair assessment, my visceral memory of that time is how quickly the collapse laid low many smart and ethical investors who I hold in high regard. During the technology bubble and the financial crisis, I learned many times over that a market crisis is very much a personal crisis as people from all walks of life suffer a sudden reset of their financial circumstances.

The second memory took place during the thick of the market panic—I’m not exactly sure which day it was, but it occurred around the table in our CEO Mike Hankin’s office, on one of the afternoons when market trading had been suspended. Mike had gathered us together—not to talk specifically about markets, but about what we were going to say to clients as we reached out to them. Partly out of fear, we all sought to offer perspectives on the market, and how we thought things might play out over the next few weeks as the government began its unprecedented effort to save the U.S. financial system. I clearly remember Mike emphatically cutting through the noise and saying, “I don’t know what is going to happen in the short term. What I do know is that there are a lot of great American companies that are struggling right now, that will survive and be great again.”

Wow—did his simple but powerful message turn out to be on target. As we now know, some companies that were on shaky ground didn’t make it through this period. But most solid, well-run firms did make it through, and investors who had the confidence to put their capital behind those companies when their stocks were heavily oversold were generally rewarded with tremendous returns in the ensuing years.

Betting on really solid companies in the wake of a market-wide selloff has generally been an excellent investment decision historically, and this was the case after the 2008-09 financial crisis. (The chart shows the pre-crisis decline of several bellwether stocks in various sectors, and then the one-year rebound and five-year returns produced by those stocks.) The hard part is guiding clients—and mustering our own courage—through the panic and anxiety of the moment.

So, to repeat the question, what are the most important lessons I’ve learned?

The common thread in all of these lessons is humility. I believe that humility is the most undervalued characteristic of successful investors. We all have to invest every day, knowing that if we do our jobs really well, we will be right only slightly more often than we will be wrong. Good analysts are right about 60% of the time. Investors sometimes comfort themselves with “batting average” metaphors, and while a .600 average would be legendary in baseball, it is a far more painful result when real-world outcomes are on the line. Think about hiring an auto mechanic to fix your car, or a doctor to fix your leg, who sports a .600 average—you would never do that. Yet we know that the best investors in history were still wrong with 30-40% of their investments. Given that reality, I am grateful to have learned investing at Brown Advisory, where our philosophy, process and team were all built with purpose around a core of humility. I truly believe that approach is the primary source of value we deliver to our clients.

Any business or tax discussion contained in this communication is not intended as a thorough, in depth analysis of specific issues.